By Audrey Yoshiko Seo, Stephen Addiss
A wonderful collection of over 100 whimsical ink paintings and calligraphies by the great Zen master.

Hakuin Ekaku (1685-1768) was a multi-talented, creative, and sagacious Zen master who emphasized the importance of koan practice — using enigmatic queries and statements to illustrate the unpredictability of the mind and to encourage curiosity. His most famous koan is "What is the sound of one hand?" Hakuin also was a reformer of the monastic order of his time. He believed that Zen practice should be a part of everyday life. He passed on this teaching to his disciples:

"The true Dharma of the Zen school does not differentiate between monk and layman, man and woman; nor does it choose between high and low, old and young; in it there is neither great nor little, neither acute nor dull energy/motive power — but only the great-hearted will finally and without fail attain. So believe profoundly in this Dharma and seek deliverance with diligence. Start walking according to your ability and do not speculate whether the way is long or short."

Audrey Yoshiko Seo and Stephen Addiss have put together this comprehensive collection of more than 100 of Hakuin's ink paintings and calligraphies. They range from the famous "Three Men on a Bridge" to pieces done on the spot for his students, self-portraits, pictures of animals, and a series of whimsical Hotei images. His openness to other spiritual paths comes across in "Three Tasters" where Confucius, Lao-tzu and Shakymauni (the founders of three creeds) are all gathered around one wine pot. Hakuin's inscription reads:
Three creeds, one creed —
One creed, three creeds —
After all, what do they come to?
Attaining supreme virtue.

Seo and Addiss make it clear that Hakuin was a pioneer in reaching out to people of all classes and professions with his art. He also enjoyed humor and animals (monkeys, foxes, birds, ants, insects). These paintings enabled him to practice compassion for all sentient beings.

The Sound of One Hand: Paintings and Calligraphy by Zen Master Hakuin is also a major traveling exhibition which will be appearing at the New Orleans Museum of Art from February 12 - April 12, 2011 and then at the Los Angeles County Museum from May 22 - August 17, 2011. 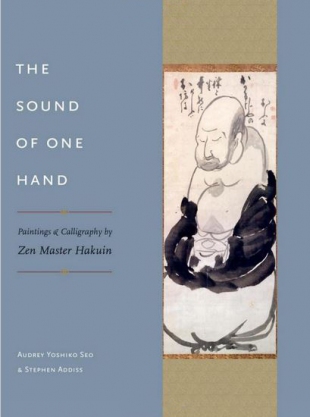