By Sister Wendy Beckett
A grand tour of the Old and New Testaments of the Bible as seen through the great painters of different eras.

Sister Wendy Beckett became a nun at the age of 16, lived for nearly 20 years as a hermit, and then was introduced to the world in a successful career as the "art nun." In her television series, she offered fresh, entertaining, and often soul-stirring comments on paintings from all eras.

Beckett's enthusiasm for both art and spirituality is contagious. She is the author of more than 20 books. In this one, Beckett takes us on a grand tour of the Old and New Testaments of the Bible as seen through the great painters of many different eras. It is interesting to note that for the first 200 years of Christian history, there were no paintings at all.

We thank God for Sister Wendy! She's one of the most impressive art historians of our time, who has championed the spiritual appreciation and interpretation of art in our times. To read her commentaries in this book and others is to see just how formidable her powers of observation are as she focuses on both details and the big picture. For example, she marvels at "the deeply inexpressible relationship that unites the sacred figures in Andrei Rubles 'Trinity of the Old Testament' " (the three men who visit Abraham with news that his wife will bear a child).

Beckett reads tenderness in Delila's hand resting gently on the muscular back of the corpse of Samson after she has betrayed him: see "Samson and Delilah" by Peter Paul Reuben.

Beckett draws out the drama in paintings of "Jesus Walking on Water," "The Good Samaritan," "The Woman Taken in Adultery," "The Raising of Lazarus," and "The Conversion of St. Paul." The stories and the wisdom of the Bible come vividly to life in this handsome book. 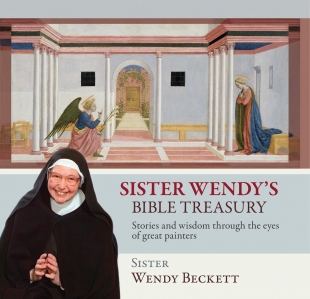