In God's Name Wisdom from the World's Great Spiritual Leaders

By Gedeon Naudet, Jules Naudet
Wisdom from 12 religious leaders accompanied by stunning photographs of devotional activities around the world.

Each chapter focuses on a first-person account of the religious leader's path, photographs of their private and public moments by Stephan Crasneanscki, and responses to a question posed by journalist Virginie Luc. Among those questions are:

In the introduction, the Naudet brothers write:

"Our goal with this film and this book is to have the four billion followers of all the world's major religions come face to face with the representatives of God on earth. . . . We hope you, like us, will put aside your preconceptions about the different faiths of the world and rediscover their messages and values through their spiritual leaders. This book represents, through the majesty of its images and its intimate interviews with these spiritual leaders, a true testament of the spirituality of humankind at the beginning of this new millennium."

Best of all are the stunning color photographs not only of the religious leaders but also of different religious practices, rites, and devotional activities. 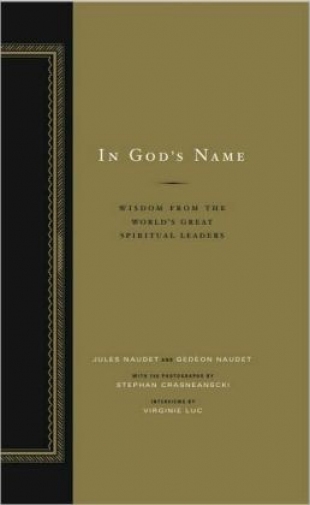