By Glenn Holsten
An engrossing documentary on the life and legacy of the very popular American painter.

Andrew Wyeth (1917 - 2009) was in the eyes of public who loved his paintings one of the greatest American painters of the 20th century. However, his staggering fame, success, and refusal to involve himself in the New York City art scene brought on the criticism and indifference of art critics, curators, and historians. They described his work as trivial, sentimental, and out-of-touch with the art of the times. Yet, a retrospective of Wyeth's work from 1938 - 1966 broke attendance records at New York's Whitney Museum of American Art in 1967; it was seen by over 5,000 people a day. 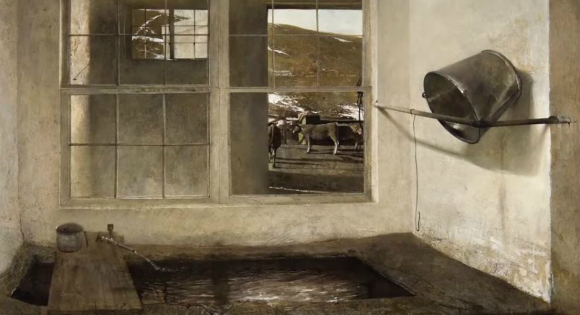 This eccentric artist loved the little details he discovered in the natural world, animals, and places. He was exposed to art and the important role of the imagination by his father, a luminary in the commercial art field who home-tutored his son in drawing, painting, and the challenges of various artistic techniques (watercolors, tempura, drybrush). A piece of wisdom given to Wyeth by his dad was: "Paint your life history." And so he did.

A fascinating segment of the documentary revolves around his marriage to Betsy James whom he met in 1939. This gifted and ambitious woman became her husband's manager at the early age of 18 and influenced his art in many ways. One of her best pieces of advice was to "work on it until it can't be better." 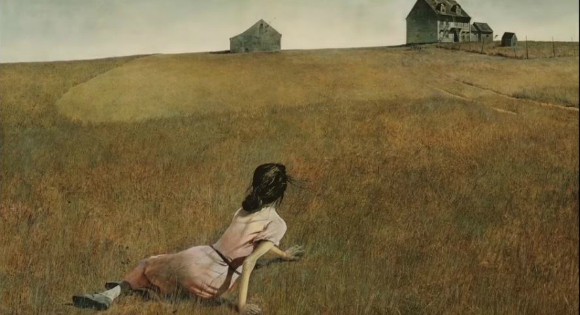 Andrew Wyeth demonstrated a deep respect for the spirituality of place with countless creations depicting the landscapes of his homes in rural Pennsylvania and coastal Maine. Whether painting his rural neighbors or the glories of the natural world, Wyeth depicted both with a reverence that was lacking in many of his artistic peers.

Director Glenn Holsten makes a good case for seeing and appreciating not only the realism but also the mysteries abounding in Wyeth's drawings and paintings. Commentary by critics and art historians on Christina's World convincingly draws out the yearning in this iconic painting. This is an engrossing documentary on the life and legacy of Andrew Wyeth.