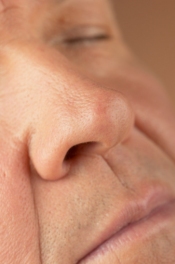 The comedian Jimmy Durante had a large nose and used to make jokes about it. "Da nose knows," he said and I believed it. We ramble through the world smelling things and being attracted or repelled by them. When I was a teenager, I worked in a fast food restaurant where I was exposed to many foul odors; three of the worst were rotten eggs, and fish and chicken that had gone bad.

I have never had a very acute sense of smell, certainly not compared to my wife's or mother's. Scientists researching this area have discovered that women have a keener olfactory sense than men do. But women can't hold a candle to dogs whose sense of smell is extraordinary. Naturalist Diane Ackerman has written that whereas a human being has 5 million olfactory cells, a sheepdog has 220 million. As a result, they can smell 44 times better than we can.

We are able to discern over 10,000 different odors. What an abundance of choices to savor and enjoy. Here are some of the smells that I love:

One of the chief pleasures of my weekly massage is my therapist's use of scented oils on my body. There are few other places where you can have this sacred experience of relaxation, healing, touch and pleasure all within an atmosphere of delightful fragrances.

Given my love of rosewater, I appreciate the Sufi ritual of spraying it on the wrists of guests as they arrive in your home. It is a sign of hospitality and an act of simple kindness. To me, it is also a reminder that we often happen upon faith like a certain fragrance that catches our attention. No wonder so many religious traditions include smells in their liturgies.

This beautiful Persian proverb sums up the spiritual potentials of smell as a transformative gift that can be given to others:

"The world is a rose, smell it and pass it on to your friends."

The world's religions encourage us to acknowledge the sacred qualities of our bodies. But how do we do this? This blog will explore spiritually literate views of the body through some of my personal experiences and favorite spiritual practices. More