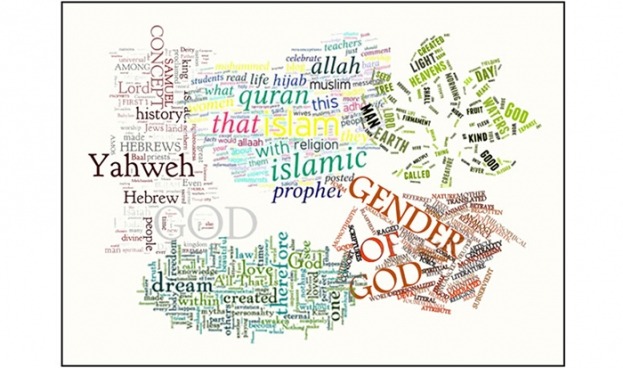 By Hannah Berkowitz for KidSpirit’s issue on The Word.

When I was 13, in the midst of preparing for my bat mitzvah, I decided I didn't believe in God. I walked into my rabbi's office for our weekly meeting about my torah portion and broke the news. I expected him to blow up, kick me out, and cancel my service.

I had comebacks prepared and had practiced my straight face, promising myself that I would stay calm, even in the face of his inevitable explosion. But all he did was tilt his head and ask one question.

"What God don't you believe in?"

Completely thrown off, I stuttered some vague explanation of the God that I had always pictured in my head — the one that kind of looks like the man from the board game Monopoly; a puppet master who controls our every move; the big guy in the sky whose "plan" is supposed to excuse every injustice. My descriptions and voice tone rose the longer I spoke. I hated God.

Infuriatingly, my rabbi just nodded. Where was his narrow-minded, angry dismissal? Where were his ignorant rebuttals to which I was so prepared to respond? Those hours I spent loading an armory of snide replies were all for naught. I fell silent, fuming. He kept nodding. After a few seconds, he looked into my eyes, leaned back, pursed his lips, and shrugged.

"I don't believe in that God either."

What? I stared at him. What other God was there? We're Jewish. Believing in only one God was kind of our thing. Wasn't the rabbi supposed to know that? At the time, I thought he was an idiot. I rolled my eyes, crossed my arms and sat back in my chair, done with the subject. He asked me to sing my Torah portion again and then let me go, but his words still echoed in my head.

I spent the next years of my life cycling through a range of beliefs — atheism, agnosticism, Buddhism, even Satanism. I had a shallow understanding of everything I tried and the only thing that stuck for a slightly significant amount of time was Satanism, although I look back on that time with only sheepish amusement. Satanism took every Christian belief and turned it on its head simply for the sake of making it seem stupid. The whole thing is spiteful and obnoxious, which fit in perfectly with my attitude at the time. I thought everyone who followed organized religion was an idiot. I didn't see the point and couldn't understand the attraction of seriously believing in a higher power.

It wasn't until about a year after my bat mitzvah that I revisited my conversation with my rabbi and my attitude about God. I must have subconsciously recognized the significance of my rabbi's words, because they never left me. I never stopped taking part in Jewish traditions and my community, but I would tune out at every mention of God when we went to High Holiday services. At some point I accepted that God was never going to be a large part of my life, but, then I really began to rethink my original perception of Him.

My attitude towards religion and religious people began to soften. I watched a good friend, physically sick and mentally lost, transform when she lit the Shabbat candles. Her eyes would clear. She would stand up straight. Her whispered prayer seemed to slide from her lips and weave around her like a shield. Her faith gave her a reason to go on. Even while she suffered she felt that there was a plan and a reason for what she was going through. When she told me that, it was the first time I felt grateful for the concept of God. Because of Him, I wasn't going to lose someone I loved.

I realized that I was just one young girl so what did I know of God? I started to figure out that God could be anything I interpreted Him to be. The word God is a placeholder for a concept, easily replaceable by "the universe" or "fate" or "Mother Nature."

That was what my rabbi meant. God was anything I wanted him to be. I don't think of God anymore as the world's scapegoat, but as a comforting possibility. We don't know why things happen in our lives. All those words are ways to conceptualize and think about the unknown in a constructive way. I'm still figuring out exactly what God is to me, but that's where I should be. I'm on a journey that is uniquely mine. My perception of Him will probably be constantly changing. The point is to learn something about myself.

When Hannah wrote this article, she was a 16-year-old 10th grader at Phillips Academy in Andover, Massachusetts. Hannah enjoys reading, writing, and listening, and loves small animals.