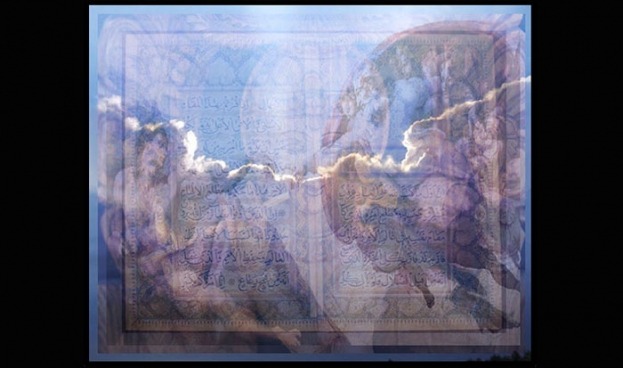 The Loudness of God

by Maria Christian in KidSpirit's The God Issue.

How has your concept of God developed? Is it still based on the tradition you were raised in or is it changing?

The first time I wanted to go to church, I was about six or seven.

I had always been a weird little kid, tall with kind of thick “nerd glasses,” the girl who played “orphans” instead of “family.” My mom was very supportive; she gave me a little purple Bible. I was really excited and loved the idea of going to church ever since my friend talked about singing in her Catholic church during show-and-tell. We decided to try a Congregational church near our house. When I got there, I was elated to find out I would be able to go to Sunday school. Oh, the mythical Sunday school, where all the cool kids went! There was only one other child in my Sunday school, though, a boy a little older than me. We read a book about Noah’s Ark, and then cut out pictures of sheep.

It was hardly a spiritually satisfying experience. I craved more than that; I wanted to know why and how, I wanted someone to explain what God is. My parents stopped taking me after a while, but they got me plenty of books. I read all the child-friendly, non-judgmental things I could get my hands on. There was one book called A Faith Like Mine, which is a compendium about different religions that teaches tolerance and respect. It had sections about all the major religions and their holidays and kids who belonged to them. At the end were short sections on religions with fewer followers. I read one on the Baha’i Faith and it explained that Baha’is believe that God was manifested in many prophets, like the Buddha and Jesus, and all religions brought a message for their age. The Baha’i Faith was the message of today. In my third-grade mind this translated as “God is known by many different names, but He is the same God,” a concept I believed strongly even then.

As it turned out, there was a Baha’i school right in my town. It is called Green Acre, and my mother’s cousin went there. I started to go with her to meetings and got all kinds of books. Soon, I became totally obsessed with it all, even being on a first-name basis with the owner of the bookstore. I even went to the youth group and the summer camps, the whole shebang. I loved it; especially the little shrine where Abdul’baha, an important man to the Baha’is, stayed in the early 1900s. I would read prayers there with my friends. When I got older, though, I started to understand that the world was imperfect, and not everyone thought exactly the same way.

One day we were in a group at a camp. We were talking about the importance of fasting when a girl wearing all black with blue hair raised her hand. She said her mother didn’t fast and she didn’t plan to either. Did that make them somehow “less” than the counselor?

The counselor said that people who fasted were closer to God, and the girl retorted that her mother was loved by God. Her mother also divorced without doing the “Year of Patience” the Baha’i writings dictate for people planning to get a divorce. After the session, I saw her angrily telling her friend that she didn’t want to talk about why she was upset. All religions have imperfect message bearers, and who knows what this girl’s mother had been through, but I stopped feeling happy in my religion after that.

I was more than unsatisfied with my experience with organized religion, and I desired something else, a religion that would entirely fill me with joy. I drifted on the edge of Atheism for a while. I started getting into Wicca, then Catholicism. I’m not sure where I belong right now.

I was trying to stifle my urge to pray and worship. Instead of having more friends, however, it felt like I had fewer because there was a part of myself I wasn’t sharing with them. After a while, I discovered my friends were not hiding their religion, in fact one girl said grace over her lunch every day. Her faith is strong and that inspired me to be strong in my faith that there is a God, and to remember that every person is different and should be able to worship freely. Instead of being ashamed of my interests, I can now view them in a more positive light.

I’m starting to learn to not look at the missionaries of a religion, not to look at the televangelists, not read the hate mail, not to listen to those who try to change who I am. I have to learn to ignore the kids who tell me how to act, and I have to be myself. Instead, I have to listen to God, whomever that is, and let Him drown out the background noise. I have to let the loudness of God take me away to wherever I need to be. I’ll still go to seven different churches and read through the piles of religious of books I’ve hoarded in my room, but they can’t tell me anything compared to what God can tell me.

Everyone should get to hear the beautiful, indescribable loudness of God.

When she wrote this article, Maria Christian was 13 years old and living in Maine. She likes to read sci-fi, write poetry, draw people, and swim anywhere! She hopes other kids who are searching for a religion know they aren’t alone in their quests.