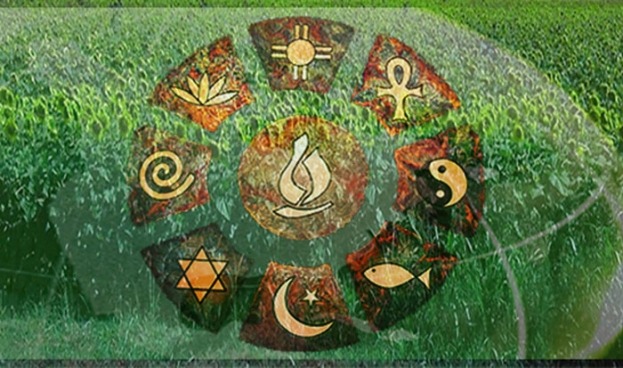 Our World: An Interdependent Web

By Anna Zimmer in the KidSpirit Climate Change issue.

I was not raised in a family where religion played a big role.

I have always known that both my parents were Christians at one point in their lives, but they drifted away and by the time I was born, they were both atheists, happy to have their Sunday mornings free of commitments. When I was in elementary school, my mom started going to a church in my town.

I didn’t find out what kind of church it was until middle school, when my mom told me that she wanted me to attend youth group there every week. I went begrudgingly, thinking how much I would rather be sleeping or watching television in my PJs than discussing faith with a group of near strangers. My skepticism increased when I learned that it was a “Unitarian Universalist” church, something I’d never heard of before. I wondered if the name was chosen purely for the alliteration. They call themselves “UUs.”

It’s alright if you’ve never heard of Unitarian Universalism; most people haven’t. Since Google doesn’t provide a very helpful definition of what it means to be UU, I’ll do my best to explain — but I do not think anyone has ever successfully written a clear explanation of my faith. Unitarian Universalism originated as a branch of Christianity, but it has since separated from the Christian religion. Every UU church does things differently, but one unifying factor is that all UU churches are accepting of everyone, no matter their beliefs.

At my church, North Parish, our reverend draws wisdom from all faith traditions. We have members who identify as Christian, Jewish, Buddhist, Pagan, Atheist, and more. There is a place for everyone in the UU community. As I got to know the people in my congregation and learned that I, too, was accepted, I have found my place among UUs. I have grown to love my church. It has become a place of refuge for me, a place where I can escape the stress of boarding school, relax and be present, for once not rushing from one place to the next.

Unitarian Universalism has seven core principles, one of which is “respect for the interdependent web of all existence of which we are a part.” Caring for the world, the environment specifically, is a huge part of being a UU. We believe that Mother Nature, however you define that — whether as a spiritual being, the earth’s life force, or as the living world that surrounds you — is beautiful and valuable. Our responsibility as members of our global community is to protect the environment because our own well-being is deeply connected to the health of our world.

As part of this interdependent web of all existence, we are affected by Mother Nature just as much as she is affected by us. As such, we must never stop working to protect her. The first time I learned about the need to protect the environment was actually before I started attending my church. I was in fourth grade, learning about ecosystems and recycling, mostly just drawing a lot of pictures of big blue earths and big green arrows. For some reason, though, that unit stuck with me more than any other I’d ever learned in a science class. I went home and lectured my family about the importance of recycling until they had no choice but to take me seriously. Having already had this interest in keeping the earth clean before becoming a UU, the green principle resonated with me more than any of the rest.

My church was certified as a “Green Sanctuary” in 2012, which means that the Unitarian Universalist Association assessed the environmental impact of our building and surrounding grounds, how we dealt with consumption and waste, and how we educated our members about environmental issues. After this initial assessment, my church put together a Green Sanctuary Committee that did wonderful work throughout our community: leading a recycling initiative, showing educational films, encouraging discussion among youth, and organizing teams to clean up local trails, parks, and graveyards. All this eventually got us our certification.

As a certified Green Sanctuary, we have committed ourselves to bettering our community in terms of caring for the environment. The Green Sanctuary Project has four different categories that each congregation has to focus on: environmental justice, worship and celebration, religious education, and sustainable living. Once a congregation has become certified, it is important to continue making improvements. The church is encouraged to apply for re-certification even after obtaining Green Sanctuary status. Re-certification is important because it reminds a community that the fight to build a happier, healthier world is never over.

Becoming a Green Sanctuary is how my church chose to uphold the values of our green principle. Seeing those in my community take action has reaffirmed my own beliefs, those first introduced to me in fourth grade, about the importance of caring for the environment. Knowing that my faith cares about these issues as much as I do has given me confidence that there are people willing to help to heal our earth. I believe that is the most important principle of all: to live the values you preach. That is certainly what my church has done and what I hope to do in my own life.

When she wrote this article, Anna Zimmer was a 10th grader at Phillips Academy in Andover, Massachusetts. She enjoys good food and interesting conversations.