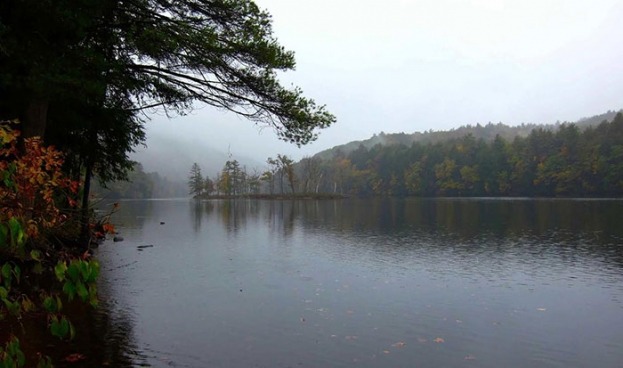 A Rainy Day at Camp

By Daniel Goetz in the KidSpirit Mysteries of the Universe issue.

It was day ten of my month at Camp Pathfinder. It was day four of my first trip into the wilderness of Algonquin Provincial Park.

I had wanted to go to this camp my entire life; my friend had talked about how fun it was for years. I expected it to be awesome, but I had no idea the kind of awesome I would experience.

However, at that moment, paddling in the rain, all I wanted to do was go home. We had been canoeing across lakes and carrying our gear across land for four days. My arms felt like they were going to fall off. That day we were paddling on the largest lake in the park, and it was pouring rain. Even though I had my jacket on, rain was trickling down my neck, making my clothes wet. I was kneeling in a puddle that covered the bottom of the canoe.

The wind blew so hard that trees were falling. Lightning was crashing in the distance. The air was so cold that when I dipped my hand into the cool lake, it felt like a warm bath. Suddenly the boat started to tip because of the wind. My friend Mac and I had to fight to keep it steady. We just kept paddling hard.

When we saw the designated camp site, I felt a rush of relief. As we paddled closer, we all knew we were going to get a rest.

When we came ashore, some campers were already there. They offered to let us rest for a bit under a tarp. The tarp collected raindrops, and we filled our water bottles with delicious sweet water. We had been drinking lake water treated with purification tablets that tasted awful.

After we rested, we paddled on to another camping area 20 minutes away. There we set up our tents in the rain and dark and soon escaped into our cozy dry sleeping bags in our cozy warm tents. The warmth soothed my achy arms. I was exhausted and also excited to finally be at our home for the night.

The next morning, the rain was pelting off our tent and the air was freezing cold. We were supposed to go for a hike but didn’t want to, so we made a genius plan. When the staff came to get us for the day, we pretended to cry. The counselors became very overwhelmed by this and said we could go back into our tent for a little bit so that they could talk. A couple of minutes later, we got the good news: we had been given a day to relax.

Unfortunately, we had already packed up our tent. So we set it back up. Then we disappeared into it for the entire day. The staff cooked us noodles, and we ate them by the handful out of the pan. One counselor said, “If it’s still raining by tomorrow, we will get an evacuation.”

The day was filled with sleeping, reading, and talking. We didn’t have dinner until late that night, but that only made us more grateful for it. The counselors made the tastiest, warmest, gooiest tuna melt sandwiches over the fire. I can’t say I have ever loved a dinner so much. It was a strong feeling of home and comfort in a wild, rainy place.

Then the rain stopped. That night I lay there in the quiet. In Brooklyn, where I am from, it is never quiet and never dark. I couldn’t sleep, so I went outside to take a short walk. The sky had been grey and cloudy for days. I wasn’t prepared for what I saw when I looked up. Here, away from the light pollution that I was used to at home, the sky was full of stars. There were so many it was as though I could see the entire universe. I felt dizzy looking up at that huge sky; I was so small beneath something so big. It was an awesome sight.

We went on one more trip, and then it was time for my parents to pick me up. On the way home, my family and I got stuck in the Toronto airport, and it was there I first realized I had been changed by my camp experiences.

As I stood in line to board the plane, the monitors and announcements and bustle of people were jarring. My body and mind had learned to tune into natural things. While I was away, I had forgotten about anything electronic, because we weren’t allowed to have phones or video games. At home, I had depended on these devices to calm down after a long day at school. But at camp I felt peaceful out in the wilderness sleeping on the ground, swimming in the lake, and even letting the rain soak my clothes until I was wet and freezing.

Now, when I feel stress, I know a peaceful place to think about. Thinking of nature calms me when I have too much homework or a test.

I talked a lot to my family about what happened over the summer. I realized that maybe you need to be in a different place to feel new things. Maybe you need to feel scared or tired or homesick to discover different ways to feel awe.

I concluded that in order to feel warmth, I had to feel the cold. Having less at camp made me feel more. I appreciated water, rain jackets, food, shelter, and friendship in a way I didn’t before. A simple tuna melt became an amazing feast that tasted better than any food on this planet.

Finally, I realized that if I had quit on that rainy day and gone home, I would not have had all the incredible times that followed. I learned that I have to go through some tough times to have nice times. I had to paddle hard to get to the warm cozy tent. Even though my arms ached and my mind was desperate, I pushed through to get to where I was going. I finished that first trip and went on the paddle for another week. I didn’t go home; I stayed and finished my three and a half weeks. Now, I feel more independent and confident. If I can paddle in the cold rain, I can do anything.

Maybe accomplishing something difficult is like peeling back layers of yourself and revealing what is inside, and this can be a surprise. I would never have thought that I could have done what I did at camp. Being there allowed me to uncover a mystery about myself: that I am stronger than I thought. I like to think that finding a part of myself was like the rain stopping and the clouds parting, letting me see the millions of stars that night at camp.

When he wrote this piece, Daniel Goetz was 12 years old and lived in Brooklyn, New York. At the time, he attended The Berkeley Carroll Middle School. He loved to play video games, make animation projects, and spend time with his family.