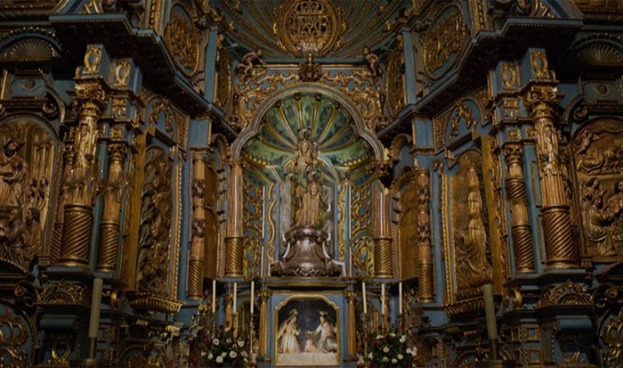 In Paraguay, the Catholic religion is an integral part of our culture. I repeatedly ask myself, how much does my religion influence my relationships with others? Religion is a real and very important connection that exists between all people who believe in a superior being. I think it is one of the most powerful bonds, since it not only connects bodies, but also souls. However, it took a long time for me to realize this.

In a country where we grow up learning about our culture, which is quite religious, my parents told me that I should worship a superior being that they called God. At a young age, I began to ask myself, “Who is this being?” and, “Why should we do his will?” My parents told me with great certainty that he was the creator of everything I could observe on earth, and that I was alive thanks to him. They said this with such conviction that a part of me felt I had to believe them. But my doubts did not clear up so easily. I asked them how they were so sure there was something more outside our planet. They answered that they had witnessed many works of the one they believed was their creator.

For a long time, I refused to believe in something that, for me, lacked sense and evidence. I thought that people who believed in some superior being were only trying to fill a void, and that they only claimed to believe in God because that was what they learned from the place where they lived. I used to feel uncomfortable when my relatives crossed themselves in greetings or prayed before meals, or when my parents forced me to abstain from meat, music, and meet-ups during Holy Week even though I didn’t share their beliefs and never wanted to follow their traditions.

But I radically changed my way of thinking. One day, when I was in sixth grade, I went to my grandmother's house after school. I saw her crying. I did not understand what was happening to her. I sat next to her, and after a few minutes I decided to break the silence and ask her why she was crying. She told me that this was a very special date for her. I asked her what was important about that day, and she laid me on her chest and began to tell me a story. Amid sobs, she began:

“Exactly 40 years ago, when life was quiet and the great city we know today was a small town with few inhabitants, I led a normal life. Like any young woman of my age, I helped my mother with the household chores. I went to school, where all my friends would wait for me, anxious to tell me the new gossip. At that time, I had a boyfriend at school, who was very handsome, by the way. I thought I was going through the best stage of my life, but suddenly, everything collapsed. One day, I woke up with a fever. I felt tired, and my nose was bleeding. When I went to the doctor, he could not give me a diagnosis. I felt helpless. My parents did not know what to do; they were desperate, and my situation was getting worse. I could not go to school. I could not even get out of bed. Those days were the longest of my life. The doctors gave me little hope. They did not know what to do with me. But so great was my parents’ love for me, they did not give up and looked for an alternative.

"They contacted a priest, who, with immense faith, asked heaven every day to heal me. Two weeks went by until I woke up and decided to do something about my situation. I could not let myself be overcome. As a last attempt, with the little energy that I had left, I asked heaven for a sign or answer, with all the faith that my parents had taught me since I was a child. I could not understand how the perfect life I had led had changed so radically.

"As noon approached, someone came to see me. He was a doctor from Argentina who was visiting us. He diagnosed me with leukemia and prescribed me the necessary medications and a strict diet for me to heal.

"At that moment I realized that this was the signal I had been waiting for; that doctor was like an angel and the work of God. I had witnessed a miracle! Several months later, I recovered completely. It was as if I finally awoke from a nightmare. All the pain was gone, and I could finally get up from that bed on which I was once prostrate for days.”

With tears in her eyes and a noticeably more liberated voice, my grandmother ended by saying, “I was born again, and that time I was born to a different father, God, who is the father of all.”

In all the time that my grandmother was telling me her story, I could see something in her eyes. There was a brightness, as well as sadness. I did not process everything she had told me at first. I was shocked, but everything started to make sense to me in time. I realized that the peculiar glow in her eyes reflected hope: the hope of having something when everything is lost, of having someone to hold on to.

Now, I’m not any more religious, but I’m more empathetic and understanding of religious people. We often judge people without knowing their story. It is hard for us to understand that every thought, belief, or action of each person is loaded with great personal experience; we are all different, and thanks to my grandmother’s story, I can more easily understand and accept people who believe in the existence of some higher being. I now understand that, for many people who have gone through a difficult time, God represents a hope that is needed when anguish and despair is winning and everything looks dark.

Religion can greatly influence how I relate to the people around me, because it allows me to know them thoroughly. Before this story, I was apathetic to religion because it did not make sense to me, but now I understand what it means to other people. I still don’t believe in all the Catholic teachings that my parents do, but I respect the tradition of not eating meat, listening to music, or going out with friends during Holy Week. I think religion is and will continue to be one of the most important factors that allows me to connect, understand, and relate to others in my community.

When she wrote this piece, Steffany Melgarejo was a 16-year-old from Coronel Oviedo City, Paraguay. She is a Scout member and passionate about camping and being in contact with nature. Steffany also likes to do volunteer work and to talk and write about leadership and society.