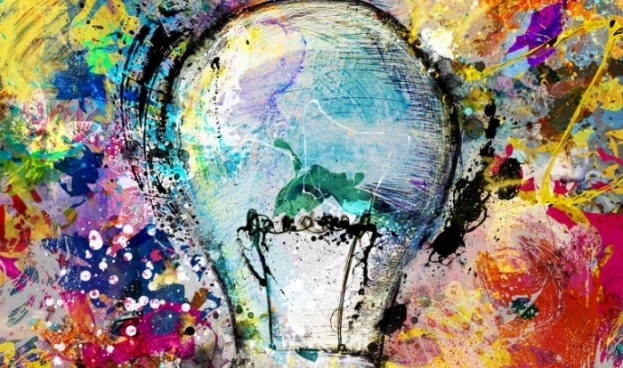 Posted by KidSpirit Online on October 6, 2021

Every one of us lives in a culture that is different, but I am practically sure that, between all of them, there is a common factor. Most people have a full life based on a series of routines.

My culture, the Paraguayan culture, does too. A good number of Paraguayan people seem to be so concentrated on daily tasks, and on keeping a routine with common “scenery.” This causes people to ignore important aspects of our lives: creativity, and the need to develop it. Unfortunately, my culture, and the culture of many other people, does not give creativity the seriousness and value that it deserves. By this, I mean that people generally have a misconception of all that creativity involves. This leads them to refer to creativity in a derogatory way, which does not bring anything good for society.

People are more interested in their economic and social position than having fun, entertaining themselves, and leaving their minds and daily chores. In addition, thousands of people think that a fun job is simply not a job, or that a job that involves creativity and expressing our emotions is a waste of time. Even worse, there is a great prejudice regarding people's creative development. People think that creativity and its branches, such as art, drawing, dance, and singing, are merely secondary activities, which do not provide any productivity for society. This way of thinking is a big mistake because it often causes people to feel frustrated and unsatisfied with themselves or with the society in which they live. As human beings, fulfillment means many things, but overall we can say that fulfillment means feeling satisfied with oneself, with the goals accomplished.

Every human being must feel fulfilled to be fully happy. It is important to spend time doing something useful and productive, so that trying and working day by day is rewarding for yourself. This issue is closely related to life goals. It should not be forgotten that once one's aspirations and purposes are achieved, great personal satisfaction is experienced.

About two years ago, I had an experience that guided me to reflect on these types of attitudes. It took place in the high school, which I attend, during a lecture focused on a personal development activity. At one point, the speaker assigned a simple task for all of us. Each of us should stand up, and tell our dreams and goals for the future, such as a profession and career to follow. Everything was going well. Then, it was Karen’s turn. She stood up and began to express her biggest dream, saying: "My biggest dream is to become a professional cartoonist, and through art to reach thousands of people around the world.” This seemed to all of us something quite interesting and worthy of admiration. She continued: “However, it will be so difficult to achieve, considering that my parents think about my dream as something stupid. They see my dream of being an artist as a nonsense profession without meaning that will not bring any benefit to me. And, I am sure that without their support, to become what I wish to be is very difficult, I would say almost impossible.” The activity continued, but those words were recorded in my mind, making me think about what that situation really involved.

Something similar happened with Anabela. I met her in a volunteer activity carried out in a city not far from mine. At that time she was 15 years old. In that activity, we became friends, and we began to talk about various topics. At one moment, she told me about a goal that she wanted to achieve in her life. Anabela had studied classical dance for six years. She had always dreamed of opening a dance academy in the future, and helping many people to develop successfully in the art of dance. Unfortunately, her parents had never supported her in that desire. They wanted their daughter to study any other career. They always saw dance as a merely secondary activity and that it only served as entertainment. Anabela came to fight her parents on several occasions, but their opinion did not change at all. Two years have passed since that conversation we had. To this day we keep in touch, but her parents continue to discourage their daughter's dream. This has undoubtedly generated a feeling of helplessness in Anabela, as she does not have the support of her parents to achieve her goals.

Clearly, those situations are not isolated events. How many people like Karen and Anabela are going through the same thing around the world? I believe most parents themselves are responsible for their child's failure in terms of creative expression. Parents are denying their children the chance to grow as individuals. This should make us think about possible solutions. There are several reasons for the attitude that these parents take. Perhaps the main one is that they worry that the arts might not provide a stable job in the future. They are blinded by the prejudice that has been carried over generations.

This is a serious mistake, since it is very important that children fully develop their talents, which in the future, if they persevere, will bring them great results in both personal and economic areas. Encouraging creativity actually helps young people to succeed in life even if they do not become artists. The best that parents could do is to allow kids to follow their dreams, even if it seems more risky.

Creativity is beneficial for any age. Creativity helps people to express themselves better and, at the same time, helps develop their abstract thinking, as they will find it easier to solve problems than others who have not developed this side of themselves. In addition, increased creativity helps children to relate more productively and better to both peers and other people. An emphasis on creativity in society could increase self-esteem in many people, because they would stimulate thier own inner resources. It would also promote good communication and sociability as the ability to express your own feelings and ideas can make you more receptive to the thoughts of others.

Enhancing creativity in people from an early age is essential for their general learning. We must also respect the learning times of each individual and give them freedom to develop all their imagination. Culture plays a very important role in all of this. A society that has prejudice against creativity or that simply does not value creativity and art in general, is tying down many people's goals.

Albert Einstein once said, “Creativity is intelligence having fun.” The famous scientist's words capture an idea we should take seriously: creativity is part of each person's life. Some people develop it more, others less, but we must stop limiting those who want to empower themselves. We must actively participate in the development of our society, letting people freely express their emotions, whether it is through art or some other means. To continue with a closed mind, and with the same prejudices, will take us back in time.

Creativity, and a sense of fun, gives a person the ability to express his or her own world, and thus feel fulfilled. The best we can do is to support those who may be limited or criticized by others. We can help them achieve their goals and who knows, perhaps we also find our own creative side along the way.

Elías Viveros was 17 years old when he wrote this piece. He is from Coronel Oviedo, Paraguay. He likes to travel, visit new places, and learn about new cultures. He loves to watch sports, especially tennis. Elías also likes to read articles about science.