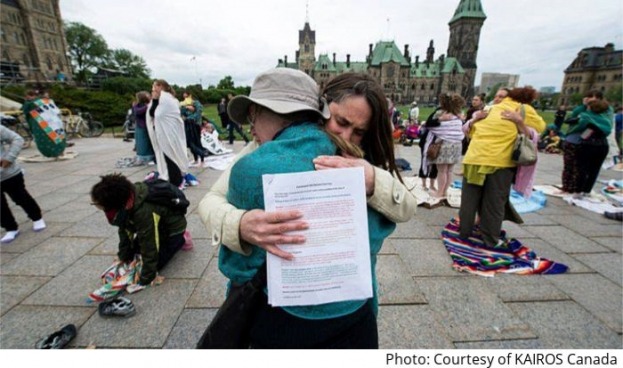 The experience of being “unsettled” as a “settler” will stay with me for a long time. During the closing event of the Truth and Reconciliation Commission of Canada in 2015 I participated in the KAIROS Blanket Exercise in Ottawa, Ontario. This is a participatory teaching tool that tells the history and ongoing realities of colonization in Canada. Blankets are spread on the ground and are then folded up and removed as the history is told, enacting the ways that Indigenous access to the land has been restricted by European settlers. Participant-actors, playing the roles of Indigenous peoples, move and are removed from the blankets as historical and ongoing realities are described. These realities include the deaths of Indigenous peoples due to introduced diseases, the genocide caused by Residential Schools, the removal from traditional lands and forced relocation to reserves, and the removal and adoption of Indigenous children by child welfare agencies.

Participating in this exercise on Parliament Hill, the location of Canada’s Parliament buildings, I was struck by how this symbol of Canada is a colonial symbol. The feelings of familiarity and identity that it conjures up for me, a Euro-Canadian, need to be interrogated because it is a symbol of stolen land and colonial conquest. The police watched us carefully during the exercise, understanding their role to be protecting the buildings and this space from our mixed Indigenous and non-Indigenous group. The police clearly saw the land as theirs to protect and the presence of the Indigenous folks leading the exercise as suspect. It struck me just how deeply wrong that is; it should be the day-to-day presence of people like me, Euro-Canadian settlers in particular, that is questioned.

For me, questioning my presence in Canada and my family’s history, was a core part of my participation in the Truth and Reconciliation Commission in Canada. This arose from hearing the stories of the survivors of the Indian Residential Schools project. As people shared their testimonies, I felt deeply regretful and deeply ashamed, but also committed to being a part of making change.

Truth and Reconciliation Commissions (TRCs) have been used around the world to bring different parties together, generally in post-conflict situations. The process allows victims and perpetrators to share their experiences and to create new narratives together. A major part of that is the reconciliation component of TRCs. Different parties make both symbolic and substantive acts of reparations for the harm that was done to ensure that the situation does not happen again.

I believe that TRCs can very much further the work of democracy. They can expose who has been excluded, oppressed, or denied their democratic rights. They can expose who and what systems have caused that, and why. And, ultimately, they work to create more just conditions for democracy to be better realized in the future.

In the case of the TRC in Canada, the work of reconciliation involves a variety of aspects, including financial reparations to survivors, statements and acts of apology from groups and organizations, including specifically the religious organizations who operated Residential Schools. A report from the TRC Commissions details 94 Calls to Action about the changes in Canadian society that are needed going forward. These include changes related to educational curriculum about Indigenous peoples and residential schools, examination of the criminalization of Indigenous peoples in the justice system, rectifying the inequalities in public services and benefits received by Indigenous Peoples compared to non-Indigenous Peoples, and implementation of the principles of the United Nations Declaration of the Rights of Indigenous Peoples by all sectors in society. Read more about the TRC's Calls to Action.

Although the TRC process has concluded, there is still much more to be done. There is the possibility that the TRC reports will be placed on a shelf, and the government and other civil society groups will feel they have done the work. But inequality persists, a clear indicator that the road ahead is a long one. In the words of TRC Commissioner Justice Murray Sinclair, “Achieving reconciliation is like climbing a mountain — we must proceed a step at a time. It will not always be easy. There will be storms, there will be obstacles, but we cannot allow ourselves to be daunted by the task because our goal is just and it also necessary. Remember, reconciliation is yours to achieve. We owe it to each other to build a Canada based on our shared future, a future of healing and trust.”