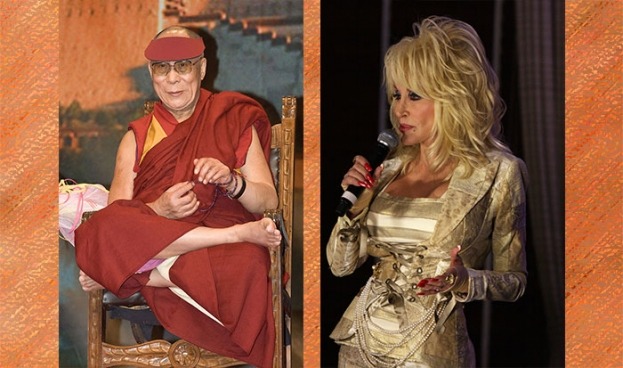 Posted by Guest Contributor on April 6, 2020

This post has been contributed by Donna Schaper, senior minister at Judson Memorial Church in New York City. She is the author of numerous books, including Sabbath Keeping.

I sometimes call my how-to guide to saving democracy a "Dolly Mama Guide to Spirituality."

"Dolly Mama" is a blend of the Dalai Lama, likely the world’s most trusted religious leader, and Dolly Parton, likely country music’s most respected singer. He is always laughing. He says that death is just a change of clothes, in keeping with Wordsworth's idea that death is just moving into another room. He doesn’t seem to be afraid of anything, including the end. Dolly Parton is always saying things she’s not supposed to say. You feel better after being near her or hearing her sing. You want to blend your voice with those of others.

We need Dolly Mama spirituality because we see a failure to be fearless and a resistance to blending voices everywhere today. It appears in civic division, hardened positions, and the inability of purple, red, and blue to communicate. When people are not adept at the art of navigating difference, they will claim that they can't communicate. That's like saying, "I can’t sing." They can sing. They can carry a tune. But they don’t know how.

We need boot camps for democracy. It would be wonderful if we could have mandatory national service and learn to get along with people unlike ourselves when we were young enough to enjoy for a long time the relationship skills that living with diversity requires. What we fear now is how things will end -- and as a result sometimes don’t even begin talking. Or we give up hope in talking. The Dolly Mama encourages us to keep trying. This means we need to have meetings and get better at them. For the time being, we will have to muddle along communicating with those who are different from us with whatever skills we have.

Here are some suggestions to add to your skill repertoire: