A Prayers for Three Muslim Students Killed in North Carolina

Posted by Frederic and Mary Ann Brussat on February 13, 2015

Holy God of Openness and Peace, our hearts are broken as we mourn the deaths of three Muslim university students who were shot to death in their home in North Carolina. Their faith led Deah Barakat (23), his wife Yusor Mohammad Abu-Salha (21), and her sister Razan Abu-Salha (19) to serve humanity from the inner cities of North Carolina to Syrian and Palestinian refugee camps. May their family, friends, and community know that we share their grief over the loss of these beautiful ones. 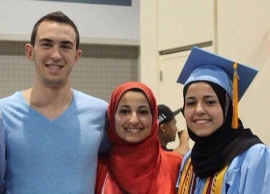 We also ask you to watch over the soul of their neighbor, Craig Stephen Hicks, the violent and angry man who is being held for the murders. There are conflicting reports as to his motivation for this crime, but whatever the investigation reveals, it reminds us of the too-often deadly consequences of religious hate and bigotry.

REPORT: Hate crimes against Muslims in the United States skyrocketed after the September 11, 2001 attacks. In the last few years, specifically anti-Muslim crimes have made up about 13 or 14 percent of hate crimes considered to be committed with a religious bias. That amounts to nearly 100 anti-Islam hate crimes each year from 2011 to 2013, according to FBI data. (Harrison McClary for Reuters)

O Lover of Diversity and Freedom, nurture within us a love and respect for all the world's religions and help us to be active and effective spokespersons for the freedom of religions everywhere.
Amen.


Our friends in the Groundswell Movement are inviting people to send prayers and messages of solidarity to the Muslim community to show that we reject the hateful actions of this shooter and stand with them.

Next Post: A Prayer for New Audiences for Visual and Performing Arts