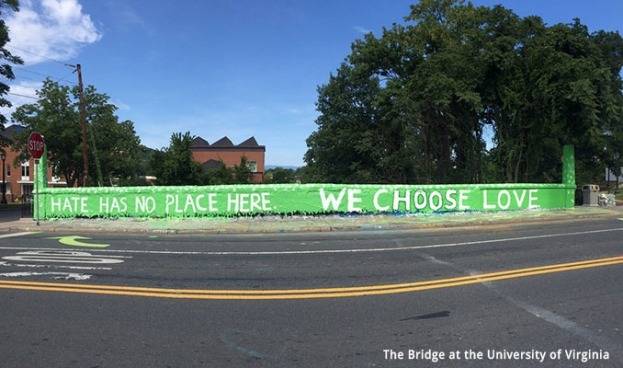 A Prayer from Charlottesville

Source: On Saturday August 12, at a rally in Charlottesville, Virginia, for white nationalists and other right-wing groups, a man drove a car into counter-protestors, killing Heather Heyer, a 32-year-old paralegal, and injuring many others. Fuller Theological Seminarian Lauren Grubaugh was there as a counter-protester and shared her perspective on the website of All Saints Church in Pasadena, California. She said that she struggled to pray "to the God whom we have forgotten, and whom we had best remember." But — "exhausted by the hate and the fear and the violence and the death" — she wrote a prayer "because I needed to remember God after what I saw today."

A Prayer from Charlottesville
by Lauren Grubaugh

To the God whose own child’s lynched body hung limp on a tree,
not by Her own hand,
but because of the fear and hatred of those human beings
who feared the kind of world they were promised would be ushered in
and hated the changes they would have to undergo to get there;

Our memory is so short:
Our failure to remember the sins of our parents,
Our aversion to repentance,
Our refusal to make reparations,
Is killing us.

Our souls are wasting away.
And black, brown, female, queer, trans, Muslim, differently abled bodies
Are dying.
Every day, so many.

O God whom we have forgotten,
We do not even know how to call on your name.
We have not seen you in the faces of our sisters and brothers.
We have not felt you in the pain of our neighbors, strangers, friends and enemies;

O God whom we have forgotten,
Do not let our imaginations be infiltrated by war-mongering forces of violence.
Do not let our spirits be colonized by the depressing fear of our oppressors.

Transform our minds that do not know how to think of you
Existing without these heavy chains we have placed on ourselves
and on each other.


Next Post: A Prayer to Hear the Cries of the World