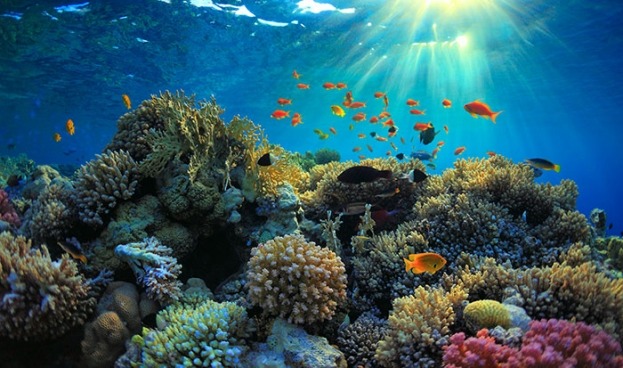 God … is not far from each of us. In God we live and move and have our being.

There are many different ways to think about God: as a force, a feeling, and a cosmic person, for example. Each has its wisdom. In times filled with violence and the threat of war, one of the most promising ways is called panentheism. Panentheism (with the en between pan and theism) is different from pantheism. Pantheism is the view that everything added together is God, pure and simple. Panentheism, on the other hand, is the view that everything is part of God, but that God is also more than everything added together. There are seeds of panentheism in all the religious traditions, including Christianity, which is the religion I know best. In this short "process musing," I want to introduce it to readers.

Panentheism is best understood by reference to its opposite: God as Holy Warrior. In Christianity one common but unfortunate way of thinking about God is the analogy of a male political ruler who presides over his subjects, issuing commands and threatening reward and judgment. The philosopher Alfred North Whitehead once observed that this involves rendering unto God that which belongs to Caesar. Sometimes this monarchical image of God is accompanied by images of war. The divine Caesar is envisioned as a holy warrior who fights evil with evil, enjoying the vengeance he reaps upon others. Those who fight in the name of this divine Caesar then imagine themselves as on His side, sharing in the vengeance. They feel happy — as if they have accomplished something for the world and for God — when others suffer.

In this more panentheistic perspective, God is equally present to all things, just like the ocean is equally present to all fish in the sea. This means that there is nowhere where God is not "always already present." God is "always already present" in Iraq and the United States, in North Korea and in South Korea, in India and in Pakistan, and in many other parts of the world. God is everywhere at once, and never reducible to a being among beings in the sky.

Christians who advocate panentheism suggest further that God is present in human life in two ways: as an indwelling lure towards nonviolent love relative to the situation at hand and as a great compassion who "feels the feelings" of all living beings as those feelings occur, sharing in their joys and sufferings. Christians typically call the first way "the indwelling call of God's spirit" and the second way as "the empathy or compassion of God."

In times threatened by war, the panentheistic perspective can be especially helpful. It suggests that even God suffers from the violence of war, sharing in the suffering of people on both sides. And it suggests that God is within all people, all over the world, as a Christ-like form of love.

Moreover, panentheism suggests that God needs the world for God's will to be accomplished. Just as fish in the ocean have some degree of freedom from the presence of the ocean, such that they can move in this way or that way, so panentheism suggests that human beings have some degree of freedom from God, such that they can act in this way or that. The calling of God within the human heart requires cooperation, on the part of human beings, for its very fulfillment. Without that cooperation there will be tragedy, even in God. This is how some Christians understand the cross of Christ. It reveals what has always been the case: that wherever there is suffering and sadness, that suffering and sadness is shared by God.

When humans cooperate with the indwelling lure of God, what does it look like? The greatest peacemaker of the last century — Mahatma Gandhi — called it "peace." Jesus called it the kingdom of God.

Whatever words we use, one thing is clear. Today there is a deep desire for this kind of peace to emerge on our planet. All over the planet people want to live lightly on the earth and gently with each other, even as their leaders may sometimes wish otherwise. From the perspective of panentheism, their desire for peace and love is not simply human. It is also divine. It is the very life of God, within each human heart, praying that the will of God might be done on earth as it is in heaven. It is up to us — all of us — that this prayer be realized.