The Mysterious Spiritual Connections Between Animals and Their Human Companions

Posted by Frederic and Mary Ann Brussat on January 21, 2013

The bonds between companion animals and their humans is a spiritual matter than involves love and deep connections. We thought of this again when we read the incredible account of a four-year-old tortoiseshell cat named Holly who was traveling with her humans as they attended an R.V. rally in Daytona Beach, Florida, She got out one day and, perhaps frightened by fireworks, disappeared. Despite several days of searching she wasn't found. But two months later, Holly showed up just a mile away from her West Palm Beach home. This strong-willed previously indoor cat had traveled 200 miles to get there. She had lost a lot of weight and was dehydrated. Judging from the condition of her paws and claws, she made this journey walking; she didn't catch a lift. 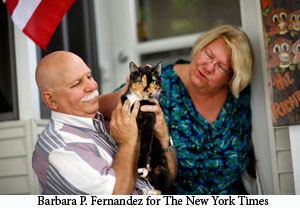 In this article about Holly's amazing feat, Pam Belluck quotes Marc Bekoff, a behavioral psychologist at the University of Colorado: "I really believe these stories, but they're just hard to explain. Maybe being smart, maybe reading animal clues, maybe being able to read cars, maybe being a good hunter. I have no data for this."

Rupert Sheldrake, an English biologist, wrote a bestselling book titled Dogs That Know When Their Owners Are Coming Home and Other Unexplained Powers of Animals. He describes experiments and data on three forms of psychic ability found in animals: direction-finding, telepathy, and precognition. Anyone with a cat who runs away to hide whenever it's time to take her to the vet knows that there is much more to study here.

But for now, the why behind this and similar stories is a mystery. (Our personal theory, unverifiable but just as good as any other explanation, we think, is that Holly was being coached on the route home by animal spirits on the other side.)

The message to take home from Holly's 200-mile trek is that the spiritual love connection between animals and humans creates wonders and miracles beyond our understanding.