Statisticians put the number of people who die each year at 56 million. That comes out to 153, 000 deaths a day, 107 deaths per minute. Death speaks quite loudly to some of us, Erica Brown notes in Happier Endings: A Meditation on Life and Death. But most people still harbor a deep fear of death and refuse to focus on it. 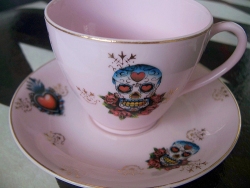 Some, of course, have always taken death head on. Monks, both Buddhist and Christian, have kept skulls in their cells so they could ponder death and the impermanence of life. An equivalent practice is talking about death and dying openly and discussing what needs to be done as the end of life approaches. This is now happening in "Death Cafes." In an article in The Independent, Molly Guiness reports that the Swiss tradition of cafe mortels is now happening in Paris. The idea, according to Swiss sociologist Bernard Crettaz, is to gather a small group of strangers in a café that serves coffee and then to talk about death for a few hours.

Now this phenomenon has started in New York and other U.S. cities with organizers using Meetup.com to gather a group. There's even a website, http://www.deathcafe.com, that explains how to hold your own Death Café and lists upcoming ones. It notes that "The objective of Death Cafe is to increase awareness of death with a view to helping people make the most of their (finite) lives."

We believe that it is a good and helpful thing to talk about death which, Crettaz points out rightly, is "the last taboo." But we find it striking and actually quite sad that religious institutions, who have quite a bit to contribute to this conversation, have failed to meet the need for discussions of death so that it has had to be taken up by a social franchise.


The surfeit of bestselling books about heaven and the afterlife being devoured by the American public is another sign of the hunger for thought and conversation about death and dying. We at Spirituality & Practice have done our best to cover books and feature films on this subject and will be curating our content for a topic page on death this year. We'll let you know when it's ready through our e-newsletter.