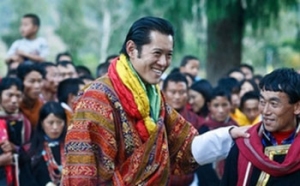 In an article written for the National Catholic Reporter, Joan Chittister recalls seeing a road sign when she was in Bhutan in June. It said: "Start early / Drive slowly / Arrive safely." She immediately knew that she was in a special place. While the rest of the world is in hot pursuit of the success and prosperity brought by development and consumerism, the tiny kingdom of Bhutan has adopted a different standard — Gross National Happiness. Chittister calls this "a spiritual rather than an economic metric of achievement."

Gross National Happiness rests on four major principles growing out of Buddhist values: 1. sustainable and equitable socioeconomic development, 2. conservation of a fragile ecology, 3. the promotion of culture and the purpose of human civilization, and 4. good governance that looks beyond greed to human development.

Although there have been problems accompanying this radical platform, Chittister salutes the pioneering efforts of Bhutan's leaders to forge a nation based on spiritual principles rather than financial success and the power of the rich. She writes: "Imagine what our own country would look like if we refused to do anything that would compromise our national resources, the care of the people, the preservation of the environment rather than its exploitation and the protection of our animal species, as well as the purity of the human environment."

We and Joan Chittister would be so happy if America adopted these national goals instead of the gridlock in Washington brought on by the two political parties enslaved to the wishes and desires of the 1%.