Posted by Frederic and Mary Ann Brussat on January 7, 2014 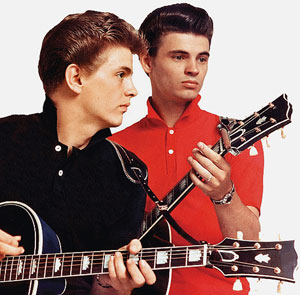 In a time when there is so much discord in the world, it is soothing to listen to singers whose voices blend together and bequeath to us music that heals the body, mind, and soul. Don and Phil Everly, known as The Everly Brothers, had their first hit recording in 1957, the single "Bye Bye Love." Their debut album, The Everly Brothers, released in 1958, contained more songs that roared to the top of the charts propelled by their energetic vocals and twanging guitars. They were inducted into the Rock and Roll Hall of Fame in 1986. Phil Everly died on January 2 at the age of 74.

These two brothers created a special blend of music consisting of pop, country, and R &B. But the true magic was their singing in tandem with Phil on the higher note and Don chiming in to create a seamless harmony. This distinctive vocal style not only found a large audience but had an impact on the music of the Beatles, Simon and Garfunkel, Linda Ronstadt, and many others.


Some of our favorites from their repertoire include "Wake Up Little Susie," "All I Have to Do Is Dream," "When Will I Be Loved?" and "Devoted to You." When we think of the Everly Brothers, the first thing that comes to mind is their mastery of the art of harmony with neither voice battling with the other but instead two voices fusing together beautifully. Centuries ago, another musical master, Johann Sebastian Bach, noted: "Music is an agreeable harmony for the honor of God and the permissible delights of the soul." We will remember Phil Everly for the many delights he brought to the altars of our ears.