We'd Rather Shock Ourselves than Quietly Sit Alone 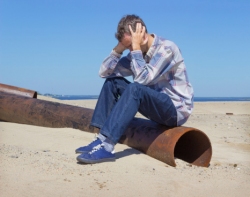 Talk to people today about being alone and many of us will admit that it is a very unsettling experience. Given a few unstructured moments, we fill it up with texting others, posting to our social media accounts, listening to music, watching YouTube videos, or reading emails. When we stop doing and face simply being, we soon feel bored and restlessness overtakes us. Have we lost the capacity for silence and solitude?

In a shocking article on cnet.com, Chris Matyszczyk writes about the
findings of a research project by the University of Virginia and Harvard that looked at how people between the ages of 18 and 77 responded to sitting alone with their thoughts for between 6 and 15 minutes. They did not take well to the experience at all whether at home or in the lab. About one-third of the participants admitted that to escape the experience of just being alone with their thoughts they cheated by engaging in some activity such as listening to music, using a cell phone, or leaving their chair.

The researchers then decided to take the test one step further by asking: "Would humans rather do something unpleasant to themselves, rather than merely be alone with their inner musings?"

One quarter of the women and two-thirds of the men preferred to administer a mild electric shock to themselves rather than just sit there.

Psychologist Timothy Wilson and his team concluded: "What is striking is that simply being alone with their own thoughts for 15 minutes was apparently so aversive that it drove many participants to self-administer an electric shock that they had earlier said they would pay to avoid."

The act of being alone has been an essential dimension of spiritual and mystical experiences for millennia. The shaman in the cave, the sadhu in the forest, the yogi on the mat, and the prophet in the wilderness all seek refreshment and meaning in their solitary encounter with God far from the maddening crowd – and far from the activities and busyness of daily life.

What kind of spirituality can speak to those who have lost the ability to be still, who have no yearning for solitude, who don't like dealing with introspection, and who are numbed by boredom and addicted to frantic activity? We have some ideas and will be curating practices for this growing group on Spirituality & Practice. Watch especially the "Being Present" and "Silence" practice pages.