Amma is in New York City this weekend (July 5 - 7) so we are revisiting our resources about her incredible service. 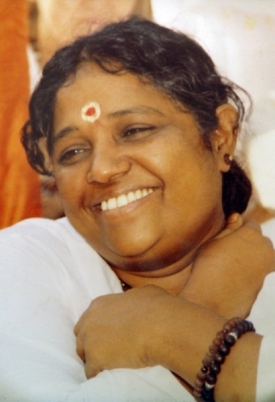 Amma, meaning "Mother," was born in India in a small fishing village in 1953. In the late 1970s, this "God-realized soul" set up an ashram in her childhood village. She is known around the world as the "hugging saint" who in one day may embrace 10,000 people. She has given 32 million hugs worldwide, according to Amanda J. Lucia's book Reflections of Amma: Devotees in a Global Embrace. In Sacred Journey, Swamini Krishnamrita Prana notes that Amma is seen by millions of devotees in India and elsewhere as the reincarnation of Ramakrishna or the incarnation of the Divine Mother Kali.


We thought of this Indian saint when we re-read our blog post on Arms, Hugs & Cuddles: The Path of Connections and this quotation by family therapist Virginia Satir: "We need four hugs a day for survival. We need eight hugs a day for maintenance. We need twelve hugs a day for growth." Hugging is a spiritual practice which outwardly expresses love, affection, encouragement, peace and healing. Inwardly, we feel a mix of positive and life-affirming emotions when we hug or are hugged.

What goes on when a person is held in Amma's arms? In her book Amma: Healing the Heart of the World, Judith Cornell writes:

"When Amma embraces or kisses someone, it is a process of purification and inner healing. Amma is transmitting a part of her pure vital energy into her children. It allows them to experience true, unconditional love."

Here are a few of this Indian holy woman's teachings gathered by Janine Canan in Messages from Amma: In the Language of the Heart:

"Children, don't waste a single second.
Serve others, above all the poor,
expecting nothing in return."

"Wherever a heart beats
with compassion:
God is there."

"Into the cup of intellect
pour devotion,
and drink."

In the documentary Darshan -The Embrace, directed by Jan Kounen, we see a clip from the moment when Amma received the Gandhi-King Award for Non-Violence. Previous recipients have been Nelson Mandela and Jane Goodall.

Amma's primary message "Love and Serve" comes across effectively in River of Love, a documentary directed by Michael Tobias. It provides an up-close and personal look at the life and work of one of the world's greatest living saints.