The Meme as Meme

In an article on nautil.us, Abby Rabinowitz explores the many uses and meanings of the meme, one of the most popular forms of viral Internet phenomena. The website Know Your Meme defines it as "a piece of content or an idea that's passed from person to person, changing and evolving along the way."


So far this medium has been mainly represented by gifs of cute cats or dancing animals or a photograph or cartoon with a clever or snarky message inscribed over it. They are popular with bored workers, students, and social media users who want to keep up with everything.


Richard Dawkins, an evolutionary biologist, coined the term "meme" in his classic 1976 book The Selfish Gene to describe cultural transmissions which change as they compete for our attention. For Dawkins, memes include everything from ideas to songs to religious ideals or pottery. Given the sober and intellectual background of memes, it is odd that academics have ignored them. Philosopher and meme theorist Daniel Dennett hopes to rehabilitate the term for studying cultural evolution. His views on why this is important are most interesting.

Meanwhile advertising firms have discovered that infectious Internet memes are big business. They are creating copy that looks like a new meme but really is an ad. Spirituality & Practice creates memes using photographs and spiritual quotes, which we post on our Facebook page. On our new website, we'll have galleries of our memes for you to share through social media. But we don't make these as ads. (We are happy to report that our new site will be ad-free.) We find memes to be a good way to convey spiritually varied and illuminating content. 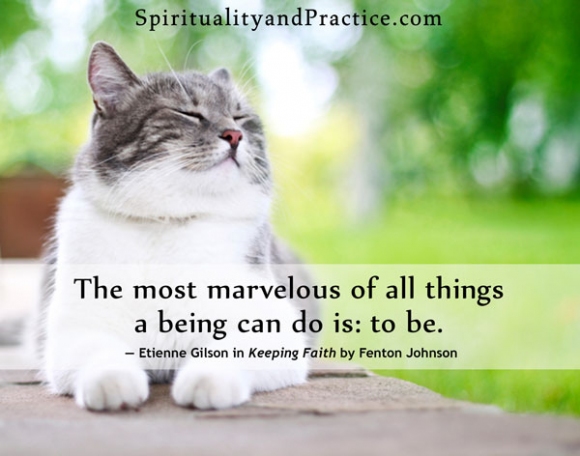 Next Post: The Long Marriage of Mindfulness and Money