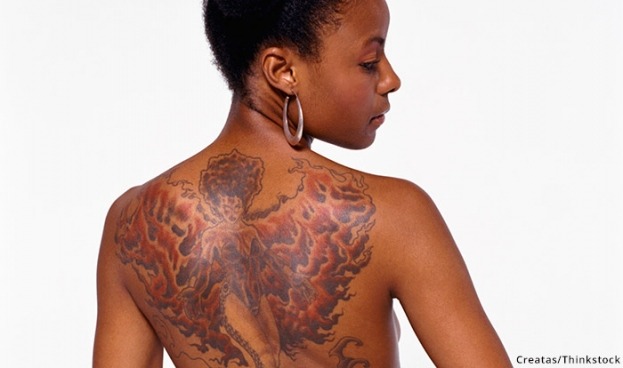 The Spiritual Significance of Tattoos

Posted by Frederic and Mary Ann Brussat on February 22, 2016

There was a time when most people thought that tattoos were just embraced by merchant marines, bikers, and goths garbed in black. But now they are part of mainstream cultures around the world. Body adornment has lost its marginal status and acquired glamour. Of course, youth have adopted this use of the flesh to set themselves apart from older generations. But as Cassandra Franklin-Barbajosa in an online article for National Geographic Magazine, tattoos are part of a rich cultural history going back 5,000 years.

She presents examples of body modification by Egyptians, Romans, and Crusaders of the 11th and 12th centuries. Perhaps the most exotic tattoos were used by inhabitants of the South and Central Pacific islands where "when in mourning, Hawaiians tattooed their tongues with tree dots. In Borneo, natives tattooed an eye on the palm of their hands as a spiritual guide that would lead them to the next life." Franklin-Barbajosa also takes a look at the tradition as practiced in Japan for beautification and magic.

Today's tattoo devotees spend time at international fairs and conferences where this art form is respected, even if it has become an individual act of consumption. What has caused this renaissance of interest? "The melting pot that is the United States has no rites of passage as a single American culture," says Ken Brown, a tattoo artist in Fredericksburg, Virginia. "On some levels, getting a tattoo is like a milestone that marks a certain moment in a person's life." Spiritual people recognize this as art, as beauty, and as ritual.


Next Post: The Importance of Hope in a Time of Climate Change