Our Longing for Lists

Posted by Frederic Brussat on October 9, 2012 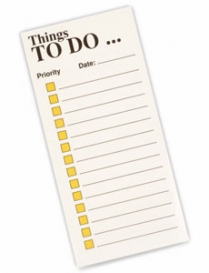 Phil Patton writes in an article in The New York Times about the American obsession with lists. They are found in every cultural endeavor and are part and parcel of our everyday lives. At work we make out "to do" lists to organize our days and at home we make shopping lists to keep track of what we need at stores. In our culture, we have the Netflix queue, best of the year lists in films, books, and music. Businesses have checklists to insure the proper way to do things. And, of course bird watchers across the country have their lists which are a source of pride an achievement. Last but not least, Patton classifies menus as lists.

"The bucket list" has become very popular since the movie starring Morgan Freeman and Jack Nicholson as two older men who list all the things they want to do before they die. People have used this activity as a means of discerning what is important to them or as a guide to their innermost dreams. Others have used bucket lists to jumpstart goals, projects, or travel plans. We are supportive of all ways to clarify what matters to you. Making your bucket list may be an enlightening spiritual practice for you. Try it, if you haven't done so yet!