Owning Your Own Shadow Understanding the Dark Side of the Psyche

By Robert A. Johnson
A look at what happens when we don't take responsibility for our shadow side.

"The Shadow in Projection

"What happens to the left-hand side of the balance if one does not keep it conscious and give it honorable expression?

"Unless we do conscious work on it, the shadow is almost always projected; that is, it is neatly laid on someone or something else so we do not have to take responsibility for it. This is the way things were done five hundred years ago, and most of us are still stuck in this medieval consciousness. The medieval world was based on mutual shadow projection; it thrived on a fortress mentality, armor, walled cities, possession by force, ownership of anything feminine by male prerogative, royal patronage, and city-states in perpetual siege at each other's gates. Medieval society was almost entirely ruled by patriarchal values that are famous for their one-sidedness. Even the Church took part in the shadow politics. Only the individuals whom we call saints (not all of them named or celebrated), the Benedictine monasteries, and some of the esoteric societies avoided the projecting game.

"Today, whole businesses are devoted to containing our shadows for us. The movie industry, fashion designs, and novels provide us with easy places to invest our shadow. Newspapers offer us a daily allotment of disasters, crimes, and horrors to feed our shadow nature outwardly when it should be incorporated into each of us as an integral part of his own personality. We are left as less than whole personalities when we invest our own darkness into something outside ourselves. Projection is always easier than assimilation.

"It is a dark page in human history when people make others bear their shadow for them. Men lay their shadow upon women, whites upon blacks, Catholics upon Protestants, capitalists upon communists, Muslims upon Hindus. Neighborhoods will make one family the scapegoat and these people will bear the shadow for the entire group. Indeed, every group unconsciously designates one of its members as the black sheep and makes him or her carry the darkness for the community. This has been so from the beginning of culture. Each year, the Aztecs chose a youth and a maiden to carry the shadow and then ritually sacrificed them. The term bogey man has an interesting origin: in old India each community chose a man to be the 'bogey.' He was to be slaughtered at the end of the year and to take the evil deeds of the community with him. The people were so grateful for this service that until his death the bogey was not required to do any work and could have anything he wanted. He was treated as a representative of the next world. Since he had the power of the collective shadow in him he was supremely powerful and feared. From India through the West we still have the threat 'The bogey man will get you if you are not good!' This is how we frighten a child into goodness with the dark side of life." 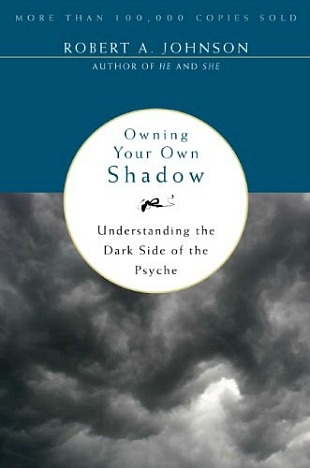