By Arthur Waskow, Phyllis Ocean Berman
Home-bringing as an apt metaphor for retirement.

"There are four moments of the inward-turning that would seem especially appropriate as focus-points for ceremony. One is retiring from a job or a career. Another is shifting to a smaller home. The third is learning to 'share' the dying of the growing number of one's friends who are walking the last steps of life. The forth is a conscious gathering to bless the next generation and plan one's own death.

"The first strikes some interesting resonances with the Jubilee tradition of the Hebrew Bible. In that tradition (Lev. 25), every fiftieth year was a year of social and individual transformation. One crucial aspect of that transformation was that working paused, for a long Shabbat. Indeed, the count of fifty for the Jubilee was based in a sabbatical count of seven sevens, seven weeks of years in which each week had seven years: forty-nine years plus one.

"In that year, there was no organized agriculture. No sowing, no harvesting, no pruning of the grapevines. Whatever grew could casually be plucked. Whatever had been stored before could be drawn on to meet whatever needs arose. A whole society made itself into the nomadic hunter-gatherers of its early days.

"The Hebrew word for this momentous event, Yovel, has entered many languages not intranslation but in rough transliteration — thus, 'Jubilee.' But some modern scholars, probing into the origins of this odd word, have concluded it was originally the term for a special note blown on the shofar (ram's horn) by shepherds — the special note to call home the flock at the end of a day of wandering in meadows, responding to the shepherd's crook, fearing wolves and lions.

" 'Home-bringing' is the way Everett Fox's translation of the Torah renders yovel.

"Home-bringing. An apt metaphor for the moment of retirement.

"Bar Yovel, Bat Yovel. One who has become a child of the Home-bringing.

"One way to apply this fifty-year pattern might be that at the age of fifty, men and women should explore life in a mode of rest, a year off in the midst of active life, not waiting till their bodies, minds, emotions are more weary. This might indeed be a boon to all of us, and to our societies. But this seems precisely the harbinger of the kind of midlife transformation we have talked about before this, in Chapter 9. Here we are looking for a different turning on the spiral. So retirement seems more fitting to the need.

"What might a Bar/Bat Yovel ceremony look like? The most salient ceremonial element of the Jubilee was a blast of the ram's horn. That might be followed by act of inward turning:

"Beyond these events, which are both 'real' and 'ritual,' a Bar/Bat Yovel might want to become a mentor to some person/s two generations younger. To these 'grandchildren,' chosen by the body or by the heart and mind, it would profoundly valuable to the hand down skills and wisdoms off handicraft, faded songs and recipes, tools that once worked to build community.

"And a Bar/Bat Yovel could take as teaching the Yovel's effort to let the earth recover and catch its breath from the previous years of being used. The Bar/Bat Yovel might devote special attention to the wisdom of the seven generations past and seven yet to come, wisdom of healing the rhythms of the earth.

" 'Going to Seed' might include downshifting to a smaller home. Many people move often in their lives, but many of these moves are to places with more space for bigger families. The reversal of this direction could seem saddening. But from a perspective of lightening loads and of strengthening others, it could be an act of joy as well.

"To make it joyful, the shift to new quarters needs to be celebrated. Emplacing the mezuza, with special attention to the passage written on its scroll about 'teaching it diligently to our children,' can be made the focus of the ceremony. Many of the suggestions we have made about the Bar/Bat Yovel transfer of memory, wisdom, beauty, could be connected to this change of homes as well as to a cessation of work. Rabbi Carey Kozberg has developed a ceremony for coming to live at a nursing home or other elder community — one that acknowledges fears of being cast off, and responds to them with prayer and song, often from the Psalms.

Third, there is the realization that a growing number of one's friends are dying. Standing alone, this knowledge might mean only more sadness, suffering. But it can become an opening toward healing of a new kind.

"In most of the life-cycle practices we have described, there is an element of teaching or of learning. Yet for this moment there may be an inward-turning that is neither teaching nor learning but simply sharing, reflecting. Calm. Present. 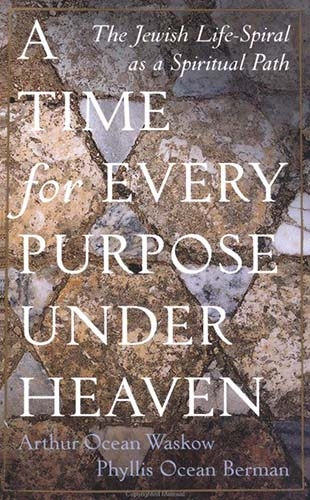