"The argument culture urges us to approach the world — and the people in it — in an adversarial frame of mind. It rests on the assumption that opposition is the best way to get anything done. The best way to discuss an idea is to set up a debate; the best way to cover news is to find spokespeople who express the most extreme, polarized views and present them as 'both sides'; the best way to settle disputes is litigation that pits one party against the other; the best way to begin an essay is to attack someone; and the best way to show you're really thinking is to criticize.

"The war on drugs, the war on cancer, the battle of the sexes, politicians' turf battles — in the argument culture, war metaphors pervade our talk and shape our thinking. Nearly everything is framed as a battle or game in which winning or losing is the main concern. These all have their uses and their place, but they are not the only way — and often not the best way — to understand and approach our world. Conflict and opposition are as necessary as cooperation and agreement, but the scale is off balance, with conflict and opposition overweighted. . . .

"In the argument culture, criticism, attack, or opposition are the predominant if not the only ways of responding to people or ideas. . . . It is the automatic nature of this response that I am calling attention to — and calling into question. Sometimes passionate opposition, strong verbal attack, are appropriate and called for. No one knows this better than those who have lived under repressive regimes that forbid public opposition. . . . What I question is the ubiquity, the knee-jerk nature, of approaching almost any issue, problem or public person in an adversarial way. One of the dangers of the habitual use of adversarial rhetoric is a kind of verbal inflation — a rhetorical boy who cried wolf: The legitimate, necessary denunciation is muted, even lost, in the general cacophony of oppositional shouting. What I question is using opposition to accomplish every goal, even those that do not require fighting but might also (or better) be accomplished by other means, such as exploring, expanding, discussing, investigating, and the exchanging of ideas suggested by the word 'dialogue.' I am questioning the assumption that everything is a matter of polarized opposites, the proverbial 'two sides to every question' that we think embodies open-mindedness and expansive thinking.

"In a word, the type of opposition I am questioning is what I call 'agonism.' I use this term, which derives from the Greek word for 'contest,' agonia, to mean an automatic warlike stance — not the literal opposition of fighting against an attacker or the unavoidable opposition that arises organically in response to conflicting ideas or actions. An agonistic response, to me, is a kind of programmed contentiousness — a prepatterned, unthinking use of fighting to accomplish goals that do not necessarily require it." 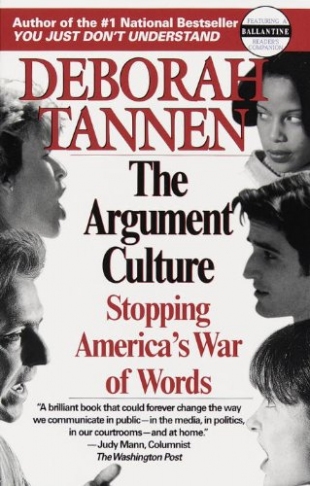