Learning to Fly Trapeze - Reflections on Fear, Trust, and the Joy of Letting Go

By Sam Keen
Sam Keen on the artistry of a trapeze troupe as an effort to create something of fleeting and fragile beauty.

An Excerpt from Learning to Fly: Trapeze-Reflections on Fear, Trust, And the Joy of Letting Go by Sam Keen

In his poetic, passionate and philosophical book on the aerial art of the trapeze, Sam Keen shares with us his many pleasures. Here is an excerpt on the spiritual practice of beauty .

"Flying trapeze! What better to give us a premonition of what Jochim de Fiora, a 13th century Franciscan, called 'the third age of spirit', a time in which we would celebrate cooperation rather than competition, lyric virtues rather than the martial vices. In the Biblical tradition the new age of the spirit that Isaiah prophesied was characterized as a time when the ancient habit of violence would be broken. 'Instead of the thorn the fig tree; the lion will lie down with the lamb; we will study war no more,' and Sunday afternoons will not be given over to the NFL. In that mythic time 'those who wait upon the Lord will mount up with wings as eagles' and fly.

"Because we usually think of trapeze as a form of entertainment in the ambiance of the circus, we are unaccustomed to thinking of it as a ceremony that incorporates a message.

"What is the gospel according to trapeze, its good news, about the human condition? The artistry of the trapeze troupe emerges from a cooperative effort to create something of fleeting and fragile beauty. It knows danger but not violence, courage but not conquest, striving for excellence but not competition, the joy of achievement but not victory. As a strictly physical achievement the quadruple somersault to the hands of a catcher is a feat of skill, daring and grace that is unmatched by any ball-bearing athlete in the NBA or NFL.

"In this ceremony, at long last, gender really doesn't matter. If some trapeze troupes still have only token female flyers who do simple tricks in skimpy costumes, others like the Korean troupe are predominantly female. In the airborne commonwealth, men and women must submit to the same disciplines, develop the same measure of strength, stamina and courage, take identical risks to create the ultimate performance art — a drama enacted by a flyer and a catcher on an airy stage that has a life span a million times briefer than a Navajo or Tibetan sand painting, a Christo fence, or a Soho performance. The ephemeral beauty created by a trapeze troupe lasts only a few seconds from the time the flyer leaves the platform, goes into the hands of the catcher and returns to the platform. Like quarks, those sub-atomic particles that are released when atoms are bombarded in a cyclotron, the substance of the trapeze art exists for an instant and vanishes forever. We watch with fascination, and then it is over almost before it began, leaving us with an image of fleeting and eternal, beauty.

"The aerial art celebrates 'the passing moment, beautiful beyond belief'. That is every man and woman's story." 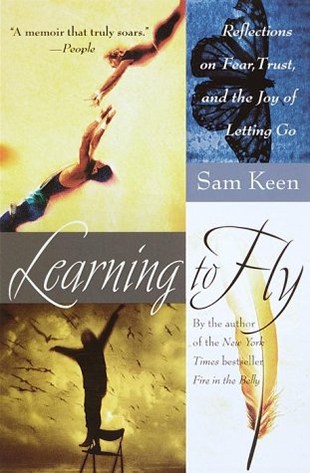