By Yushi Nomura
Yushi Nomura on the Desert Fathers' teaching story about forgiveness.

Teaching Stories from Desert Wisdom: Sayings from the Desert Fathers translation and art by Yushi Nomura
Desert Wisdom distills spiritual advice from the Abbas and Ammas of the fourth and fifth centuries. Although they were hermits, they were not cut off from the kinds of interactions that could spawn jealousy, competition, and resentment. Further, people came to them for advice on the kinds of conflicts and pressures they were experiencing, much of which still goes on today. Here are three examples of their teachings on hospitality and nonjudgment.

• "Once a brother committed a sin in Scetis, and the elders assembled and sent for Abba Moses. He, however, did not want to go. Then the priest sent a message to him, saying: Come, everybody is waiting for you. So he finally got up to go. And he took a worn-out basket with holes, filled it with sand, and carried it along.

"The people who came to meet him said: What is this, Father? Then the old man said: My sins are running out behind me, yet I do not see them. And today I have come to judge the sins of someone else. When they heard this, they said nothing to the brother, and pardoned him."

• "Abba Poemen said to Abba Joseph: Tell me how I can become a monk. And he replied: If you want to find rest here and hereafter, say in every occasion, Who am I? and do not judge anyone."
• "Abba Poemen said: There is one sort of person who seems to be silent, but inwardly criticizes other people. Such a person is really talking all the time. Another may talk from morning till night, but says only what is meaningful, and so keeps silence."
Back to reading a full review of this book. 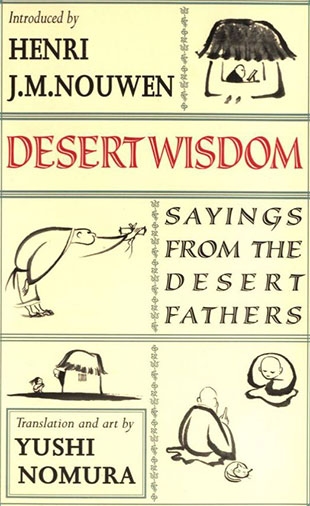