By Paul Woodruff
On the virtue of reverence held in high esteem in Greek and Chinese traditions.

"Reverence is an ancient virtue that survives among us in half forgotten patterns of civility, in moments of inarticulate awe, and in nostalgia for the lost ways of traditional cultures. We have the word 'reverence' in our language, but we scarcely know how to use it. Right now it has no place in secular discussions of ethics or political theory. Even more surprising, reverence is missing from modern discussions of the ancient cultures that prized it.

"Reverence begins in a deep understanding of human limitations; from this grows the capacity to be in awe of whatever we believe lies outside our control — God, truth, justice, nature, even death. The capacity for awe, as it grows, brings with it the capacity for respecting fellow human beings, flaws and all. This in turn fosters the ability to be ashamed when we show moral flaws exceeding the normal human allotment. The Greeks before Plato saw reverence as one of the bulwarks of society, and the immediate followers of Confucius in China thought much the same. Both groups wanted to see reverence in their leaders, because reverence is the virtue that keeps leaders from trying to take tight control of other people's lives. Simply put, reverence is the virtue that keeps human beings from trying to act like gods." 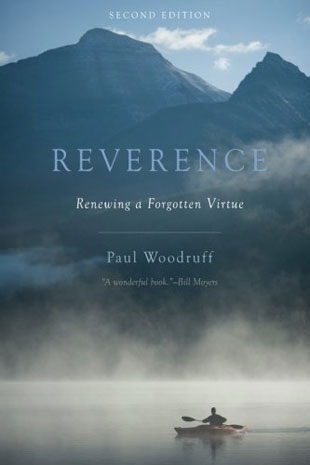