Hindu Gods The Spirit of the Divine

By Priya Hemenway
Priya Hemenway on the most prominent Hindu gods and what devotion encompasses within this tradition.

"We become what we worship. To a Hindu, worship is an attitude of devotion. It is an inner space, not an act. When God becomes an inner reality, we are free.

"The gods of Hinduism are part of the inner life of those who hold them sacred. They are recognized in their fullness when all separations between the seeker and the sought, between the devotee and God, have disappeared. The reality of this recognition is known to many under many different names. It is a state of absolute freedom and happiness.

"One of the most profound aspects of the stories of the Hindu gods is the lightheartedness with which they can be told. Life is a leela, a divine dance. It goes around, as all nature goes around, in a spiral of joy. It is the great creation that we participate in by creating its story.

"Everything is just imaginary, say some. Life is nothing but the dreaming of gods. When the dreamer goes to sleep the world is his.

"Joyful and penetrating, whimsical and sometimes disturbing, the stories of the Hindu gods are part of the fabric of life. Their stories take their meaning from our everyday situations. Their complex personalities are drawn from the subtleties of the human heart, which longs to reunite with God. Informing, revealing, they breathe meaning into small things, drawing humans ever closer to their world and nirvana, the state of absolute freedom." 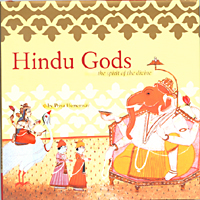