In Buddha's Kitchen Cooking, Being Cooked, and Other Adventures In a Meditation Center

"Lama P. finally noticed how silent I had been lately, brought his fingers to his mouth in a little locking motion, then looked at me questioningly. I nodded, he nodded, and that was that.

"Few people talk to me now. I feel that I'm becoming transparent, more insubstantial by the day.

"Silence, a stilling not only of the voices outside but the inner voices, the roof brain chatter. Now, without the babble of words — inner and outer — I watch my mind, notice when a thought arises. I turn my attention inward, asking, 'Who is thinking this thought?' As the mind turns to look, the thinker seems to disappear. But a focus comes from the asking, a clearing, a deepening. No 'me,' but a presence. Awareness.

"Even during my career as professional chef, I would listen closely to the undersound of the kitchen, searching for the presence of a larger order. When people insisted on talking, I couldn't hear the food. But hear is the wrong word, for food isn't audible or even audile, yet it does communicate. If you let yourself quietly be with food, something else takes place, something just outside the usual range of the senses, another order, another way of being. The it takes over. The me is gone.

"When I first worked in a restaurant, I used to daydream of a mute helper, someone who had no interest whatsoever in speaking, She (I could somehow never imagine a man in this role) wouldn't tell about her plans for vacation, the fights with her mother, the ins and outs of her most recent relationship. In my daydream of a mute helper, I was envisioning a future version of myself, of course. My imagination was sending directions, subtle hints as to how to proceed. How to glimpse the sky, how to open into vastness. The odd thing is that in addition to this sense of spaciousness, I'm starting to feel close to people, to understand and sympathize with them on a new level, to participate in their lives in unexpected ways, to notice those around me as something more than irritants, as subjects rather than objects." 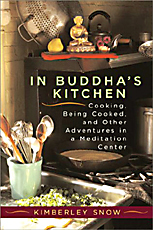