By Rebbetzin Esther Jungreis
A teaching story about you.

" 'Excuse me, I'm new in town, Could you direct me to the home of the renowned sage, the righteous Chofetz Chaim?'

" 'He's not a sage and he's not righteous,' the Chofetz Chaim protested on hearing this description of himself. Whereupon the man became furious and lashed out at him.

" 'How dare you speak disparagingly about such a tzaddik (holy man)?' And the man punched him.

"Without uttering a word, the Chofetz Chaim returned home.

"A short time later, there was a knock on his door. When the stranger saw the man he had hit standing there, he gave out an anguished cry. 'Can you ever forgive me?' he begged.

" 'No, you must forgive me,' the Chofetz Chaim responded. 'You have taught me an important lesson. Not only are we not permitted to speak loshen hora about someone else, but we are also forbidden to speak negatively about ourselves.' " 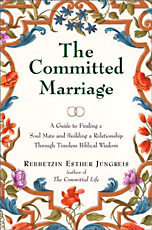