"In ancient China around 500 bce, thousands of burdensome social rituals dominated people's lives. When to bow, what brocade to wear, how to address a government official, what ceremony to conduct, even what ornament to rest by the fireplace, and much, much more were all dictated by a rigid social code called li. Through the centuries many Chinese citizens had learned to perform these rituals mechanically, turning ancient customs into worthless and often oppressive ceremony. Confucius, the great Chinese philosopher from that time, found such mindless ritual deeply damaging to Chinese society. According to Confucius, Chinese ancestors had originally shaped the rituals as a way to inspire people to be responsible toward one another and respectful of their world. But with such purpose lost, many found themselves behaving like puppets, following empty rules rather than living as dignified citizens of a great culture. In Confucius's view, the original intent of li had been lost, with disastrous effects.

"Some historians believe the term li was first used by artists of ancient China who mined and cut jade, a gemstone cherished to this day throughout China. One of the enduring difficulties in carving jade into figures and decorative designs is its tendency to crack along natural contours. Some historians speculate that these lines along which the stone would gracefully and naturally crack were once called the li of the stone. The carver's great challenge was to incorporate this tendency to break along elegant lines into a work of art, thus producing a work of rare beauty that relied inherently on the stone's natural li. This original carver's skill of bringing forth the natural beauty of the jade evolved over many centuries into a collection of techniques for sawing, cutting, sanding, and polishing jade. These techniques were handed down from teacher to student over the centuries as a body of wisdom also called li. Eventually the term li came to signify any social ritual intended to reveal the natural decency and goodness of being human. So it is from these — the carver's hand, the natural elegance of jade, and Confucius's love for humanity — that we can learn to be decent by cultivating li.

"Just as jade has a natural tendency to break along elegant lines, Confucius observed that human beings have a natural instinct to behave decently toward one another. A kind gesture, a passing smile, a desire to help others, all spontaneously arise out of a basic human goodness or tendency to be decent. According to Confucius, this tendency, li, was the source of all proper and decent human behavior. Cultivating a profound respect for this human goodness, he taught, is at the very heart of leading a worthy life. Just as jade cutters respect the li of the stone, cultivating li in society is central to promoting integrity and human dignity, requiring commitment and discipline. By cultivating li, human decency is never taken for granted but is acknowledged, respected, and preserved throughout all human activity — especially at work. Otherwise, when li is ignored, men and women can find themselves following pointless ritual, obeying the letter but not the spirit of accounting rules, remaining loyal out of fear, and avoiding rather than shouldering responsibility. Confucius considered a leader's central task in shaping human culture to be like that of a jade cutter: to bring forth the natural wholesomeness of humanity — to inspire and nourish li, thereby promoting the health, wisdom, and spiritual well-being of all citizens.

"It is one thing to say that li is our instinct to be decent and humane, but how do we access this inner 'moral compass' of integrity? Recognizing li within ourselves can be quite simple and straightforward. One way to acknowledge li is to try and deny it. For example, the next time someone extends his or her hand to you in a greeting, imagine for a moment how it would feel if you did not extend your hand in return, leaving the other person's gesture of friendship denied. Most of us would feel very uncomfortable. Try not shaking a person's extended hand and see. Or the next time you are entering a crowded store or restaurant, don't hold the door for the person exiting but simply enter first, squeeze past the person, and don't look back — just keep walking. Try it. It is almost impossible to do — it feels so improper and awkward. These small instances demonstrate the irritation of going against or corrupting li, the natural grain of our basic decency.

"There are countless simple examples of how li in its utter humanness pervades our lives: giving directions to a disoriented tourist, returning a lost wallet, offering a seat to an elderly person, holding the elevator door for a colleague. Rather than being some grand philosophical notion from ancient China, li actually is our humanity at its most basic level — an instinct that guides us to be helpful, honorable, and gracious toward one another. No rule book can teach us to extend such respect toward our fellow humans and our world. It is our li, our nature, to extend such simple and noble gestures. When we fail to acknowledge and cultivate this basic decency, rudeness, violence, and selfishness become routine and decency more the exception to the rule than an everyday bond between people. Without integrity or even basic politeness towards others, we lose our respect for our world.

"Cultivating li at work starts with extending these simple courtesies toward our colleagues, not in the sense of being overly polite or contrived, but naturally respectful and accommodating. Over time, by cultivating such respect for others, we develop a kind of 'relaxed diplomacy' that becomes part of our work style. Because we are considerate, we no longer need to apologize for being tough or straightforward; we no longer need to always make the safe decision or imagine the worst about workplace difficulties. We develop the confidence to sense when to be tactful and restrained and when to be forthcoming and direct. By cultivating li, ethics emerges as a natural expression of the mind free from fear and aggression, not something we learn from a rule book. As our commitment to li develops, so does our trust in ourselves that we will be decent, that we will 'do our jobs rightly, with eyes open.' We discover that our inner moral compass is made of jade and that being authentic is nothing other than following the natural contours of who we are." 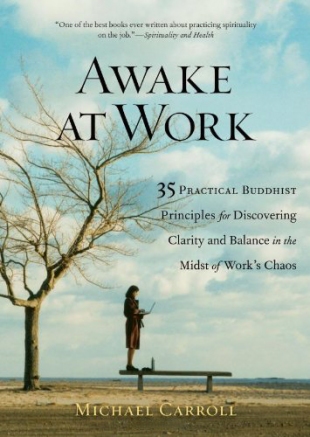