By Christina Baldwin
Christian Baldwin on the art of discovering meaning in our lives through telling our stories.

"I live in a little neighborhood of three cul-de-sacs, two miles out of town on a cliff overlooking Puget Sound. Our house is a comfortable rambler, a modest home by American standards that we have been updating as we could afford it since the kids left home in 2001. I love to play with colors and room by room the house has shifted from the all-white walls left us by its former owners to beach stone, olive smoke, cupola yellow, summer sky, and fir dream. When the words come hard in writing, I want to get a job just naming colors on paint chips, or wandering off into poetry that starts each line conjuring color imagery. In the autumn of 2004, it was time to do the kitchen. The old countertops were delaminating, the cupboards needed painting, and the 1970s track lights cast a harsh light over my cooking. We hired a local carpenter, talked our way through the job, picked out new Formica and let him tear the place apart. One night after he left for the day, I noticed a four-inch gap between the wall of the lower cabinet and the actual wall of the house. I peered down into it: dark, dry, empty. The next day, when the carpenter fitted the countertops back over this gap, it would disappear from anyone knowing it was even there. For the second time in my life I decided to make a time capsule.

"In a sealable plastic baggie I placed a current copy of the local paper, a Newsweek magazine, some photos of the house and its occupants, a business card, some sprigs of dried lavender from the garden, and the following letter:

"28 September 2004: foggy morning that promises to burn off into sunshine this afternoon.

"This cubbyhole will be resealed by a new countertop and is not likely to see the light of day again for a long time. Certainly we do not intend to redo the kitchen again while we live here and the carpenter is doing a very fine job that will be long lasting. So, I have decided to put in some memorabilia of the current times to be discovered — whenever, by whomever. Hello.

"At this writing, we have lived here exactly 10 years, having bought this house in September 1994. The former owner did all the wood finishing — window and door trim, and the ceiling in the living room — out of a woodworking shop in the backyard. He took care with the things he loved and jerry-rigged the other parts, which, luckily for you, we have been fixing throughout our tenure. Enclosed is a photo of how the house looked at this time. We are now operating a small educational company out of the converted shed: PeerSpirit, Inc. (See business cards and photos.) We are writers and teachers, group facilitators and wilderness guides, creating eclectic and satisfying professional lives.

"On our minds this day: we have ongoing concerns for the state of the world. The country is in crisis, polarized politically, in a misguided war over oil in the Middle East (currently we are occupying Iraq). Corporate greed is bankrupting us, social services are being undercut, civil liberties are being eroded, and environmental protections are being reversed. It's not an easy time to be alive when we look very far beyond these kitchen windows, but we are trying to live our lives with a sense of service.

"Most every morning we spend a few minutes in prayer: one of us sits under the big Douglas fir in back of the house, one of us sits on the front steps. We pray for goodness to prevail, for humans to learn our lessons in time to save ourselves and the biosphere on which we depend. We give deep thanks for the beauty and peace that surrounds us and know it may not always be so beautiful or peaceful. We are glad to be alive.

" • The presidential election this coming November is between George W. Bush, Republican, and John Kerry, Democrat. It's a very close race, excessively acrimonious and costing U.S. taxpayers four billion dollars. We hope there will have been significant reform in all of this by the time these words are read.

" • We are voting for Kerry; the carpenter is voting for Bush. We are talking about our political views and differences as he works.

" • The waters of Puget Sounds still support salmon, seals, Orca whales, with gray whales and humpbacks coming through seasonally on their way to Alaska.

" • Gasoline is currently $2.07 a gallon and 99 percent of the cars and trucks are still using this fuel. The first models of hybrid engines are available.

" • Mount St. Helens, a volcano one hundred miles south of here, is experiencing mini-earthquakes and they predict a moderately sized eruption within the next few days. Four major hurricanes have slammed over Florida in less than a month. Weather and planetary reactions seem to be getting more extreme and there is scientific proof of global warming that the current U.S. government chooses to ignore.

"And yet, we are learning to carry the bad news and still have happy lives — not out of denial but putting all that is happening in a spiritual frame and believing in the whole web of life of which humans are only a part.

"We hope this note finds you also able to enjoy this place, that the work of many has preserved its beauty, that the neighbors are friendly and this island is still a vibrant community.

"I zipped the bag shut and dropped it into the cubbyhole. By noon the next day it had become history. It had become an irretrievable artifact; it had become story. As I have shared word of my little impulse, others have adopted the idea and set about leaving stories and messages in mysterious places in their own homes. Notes from life in action: a blessing scrawled on the plywood subflooring before laying new carpet, the scroll of a child's drawing and a list of her favorite things slipped into the wall of her bedroom, a poem dropped between the desk and the wall of an office cubicle. Story is an act of faith that our kind will continue, that our messages for each other will someday be received, that when you read this you will recognize the offer of kinship.

"Story has a will to survive that seems almost independent of the storyteller, as though it has a life of its own. Oral story is a singing bird: when we let it out of the cage of the mind it loves freedom! The song of the self will light on our shoulder as long as we don't try to capture it. Then it will flutter away and fly places we cannot imagine. It will nest and mate and raise other versions of itself that take on the color and hue and dialect of new territory. And some spring morning when we most need to hear it, our story will return outside our window and sing us back into our self.

"Written story also has a will to survive. It loves to trick fate, to slip out of the hands of carelessness or destruction, to curl at the edge of darkness waiting and watching for the flicker of welcome: Anne Frank's checkered notebook kicked aside by the Gestapo's boot; Sacagawea pulling the journals of Lewis and Clark out of the Missouri River after their canoe capsized; the ancient poetry of Sappho tweezered out of the mouths of mummified crocodiles in the excavation of Egyptian tombs; the Bedouins chancing upon the Dead Sea Scrolls; my great-grandfather's letters tucked in his Bible; recipes in my mother's handwriting; a bundle of old love letters left in a shoe box — and a message to the future hidden under the kitchen cabinet." 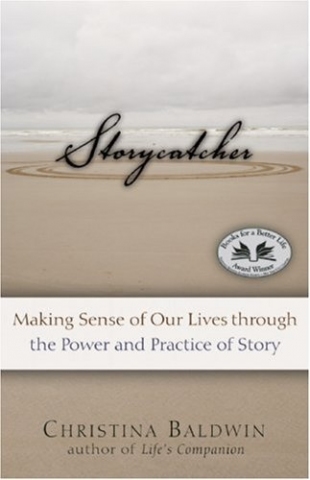