Letters to Sam A Grandfather's Lessons on Love, Loss, and the Gifts of Life

"An author and sociologist named Frank Abbott has said, 'Death is no enemy of life. We would have no idea what life was about if it weren't for death.'

"About ten years before you were born, I went through a terrible time in my life. And I had a dream that was a revelation.

"This was several years after my accident, shortly after your grandmother Sandy had left the marriage. Debbie and Ali had just departed for college. I was home alone. And my beloved sister, who had become my closest confidante, had just been diagnosed with a terminal brain tumor. My heart was in turmoil.

"Then I developed a bedsore on my buttocks. This is not unusual for someone who sits in a wheelchair all day, but when it happens, it can be a nightmare. The only treatment for these sores is to stay out of the wheelchair, so what little independence the wheelchair provides gets taken away.

"With grief welling up on every side, I visited the doctor. He examined me and said, 'It's broken.' I said, 'I know.' He was referring to the skin, but I was talking about my heart. 'Too much pressure,' he said, meaning my buttocks. 'I know,' I said, meaning my life.

"Then the doctor saw that the wound was moist.

"That's an unhealthy sign. 'It's weeping,' he said, using a medical term.

"Finally he said, 'You've got to go to bed for thirty days.'

"This was my greatest nightmare. Right after the accident, I imagined that everyone would leave me and I would be home alone, confined to bed, with a nurse who was there only because she was being paid. Then, upon the recommendation of this doctor, that's exactly what happened. Displaced from my wheelchair, immobilized, I knew I would not be able to do any of the usual things that sustained me. I couldn't see patients if I couldn't sit up or go into my office. I couldn't get to the radio station for my weekly show. I couldn't drive my van or get around the house by myself. I would have to lie prone, waiting for the wound to heal.

" 'How do you know it will take thirty days?' I asked.

"The doctor explained that skin wounds, if they are in a healthy environment, heal at a rate of one millimeter a day. I wondered about wounds to the heart. How could you measure that healing?

"He gave me a brown patch called Deuoderm to cover the wound. I told him I was surprised that the wound would be covered. I thought wounds needed oxygen to heal. Shouldn't the bedsore be exposed to the air?

"Yes, he said, wounds do need oxygen to heal. But the oxygen is in the blood, not in the air. 'Everything a wound needs to heal is already in your body,' he explained. 'We just have to get access to those nutrients and let them work.'

"Those words stayed with me. If that was the way the body healed, what about the human spirit? Remembering the old prophetic story that tells how infants are born with all the wisdom they need to live, I realized that everything we needed to heal our hearts' wounds might already be in us too.

"I went home and went to bed. But the wound didn't heal in thirty days or in forty or fifty. When it finally did close, after about two months, I was elated to get back in my wheelchair. (It made me think — how many people feel overjoyed because they can sit in a wheelchair?) But then it opened up again.

"I was devastated. Here came the nightmare all over again. I felt as though my spirit was crushed for good.

"Finally, the doctor and I decided that I should have surgery.

"One night in the hospital, a friend came to visit me. I told her I didn't think I could go on anymore. What I was feeling went beyond despair. It was a loss of hope — of everything I valued, trusted, and loved. The pain had become simply unbearable.

"My friend held my hand and said, 'Dan, what you are about is more important than who you are.'

"That night, I had a dream. I dreamed that God came to me. This was not the God I believe in, the one you read about in the Bible. It was some other God, and when He spoke, he said, 'I'm going to give you a piece of the universe. Your job is to take care of it. Not make it bigger or better — just take care of it. And when I'm ready, I'll take it back, and your life will be over.'

"I looked at the piece of the universe that God was showing me, and I saw that it was just three millimeters! Was that all? I could feel my ego begin to rail against this indignity. I'm a psychologist! I am an author! I have a radio show! Aren't these things important?

"Of course, no matter how much I protested, it wouldn't make any difference. My allotment was still — and would always be — just three millimeters of the entire universe. That was it!

"Sam, part of the reason I'm at peace with my life is that I take care of the part of the universe I'm responsible for. I haven't made it bigger or better. I haven't changed it. But I have cared for it. Writing these letters to you is just one of many ways of tending my three millimeters.

"What I wish for you, Sam, is what I wish for everybody — to get as clear a sense of what your life is about as I got in that dream. Your three millimeters is not much in terms of area. But I hope you will feel the gratitude and joy that I feel, having been given that much to tend. 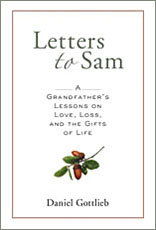