"Poetry is an ancient as the drawing of a horse at Lascaux, or an Egyptian hieroglyphic, and yet it also feels especially relevant to a post-9/11 world, a world characterized by disaffection and materialism, a world alienated from art. The horrors we face daily around the globe — terrorist bombings, ethnic cleansing, the ravages of the HIV epidemic, children becoming soldiers — challenge us to find meaning in the midst of suffering. Poetry answers this challenge. It puts us in touch with ourselves. It sends us messages from the interior and also connects us to others. It is intimate and secretive; it is generously collective.

"We live in a time when the pervasive influence of the media and consumer culture blurs national boundaries and identities. The poems featured in Poet's Choice consistently grapple with death, suffering, and loss. They defend the importance of individual lives, and rebel at the way individuals are dwarfed by mass culture. They are unaccommodating. They portray, and communicate on behalf of, people at the margins of society: exiles, transplants, refugees, nomads, people with no country, people split between two different countries, split between the past and the present. They search for meaning — in language and forms particular only to poetry — in the realm of emptiness, for company in the face of isolation. Poems are always in dialogue with other poems and in conversation with history, and they invite readers into that conversation, which offers a particular form of communication, communion, and fusion." 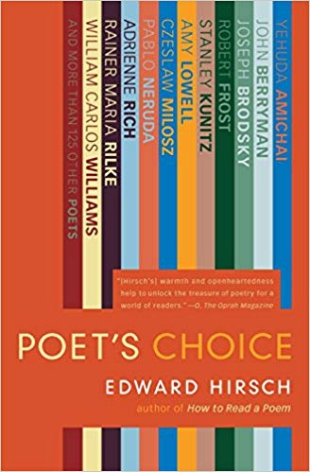