The Wisdom of Yoga A Seeker's Guide to Extraordinary Living

By Stephen Cope
Stephen Cope on the wisdom and healing power of yoga to alleviate suffering.

"I first discovered yoga more than twenty years ago. Like most Americans, I came to it initially as a form of physical exercise. It didn't take me long to appreciate the enormous benefits of yoga postures and breathing exercises, and I found myself drawn into a regular practice that steadily increased my energy, stamina, concentration, resilience, and enjoyment of life. In the early years of my practice, however, I didn't appreciate that these physical practices are only one facet of a vast and extremely sophisticated wisdom tradition. I didn't realize that the yoga postures I was doing at my health club are part of a three-thousand-year-old science of extraordinary living that concerns itself with every aspect of human functioning — mental, physical, and spiritual.

"As I discovered the larger wisdom tradition of yoga, I was intrigued: The practitioners of this science of extraordinary living have lived and thrived on the Indian subcontinent for at least the last three millennia. They have concerned themselves with a series of perennial questions — questions that are as challenging today as they were when scantily clad yogis first gathered in the forests and mountains of India: What is an optimal human life? What would it be like to function at the maximum potential or our minds and bodies?

"For at least three thousand years, yogis have carried out experiments to investigate these questions. Their bold investigations have led to remarkable discoveries about human perception, attention, cognition, motivation, sensory integration, memory, intuition, and volition. These early yogis found that very few human beings live anywhere near the optimal range of human functioning. At the same time, they demonstrated that almost any of us could do so, with much less effort than we imagine. Surprisingly extraordinary living does not require more native genius than most of us already have.

"These yogis, too, have been interested in a second, related series of questions: What are the root sources of human suffering? Can these roots of suffering be cut? Can human beings learn to be happy and at ease in this difficult life?

"Their answers to this second set of questions have also been surprising — and, frankly, for many Westerners, just plain unbelievable. Yogis studied the structure of ordinary human unhappiness, and found that the sources of everyday suffering could be entirely 'extinguished' — leading to a kind of freedom we ordinarily think impossible. Yogis have called this 'liberation.' Liberation in this instance means freedom from all the sources of conditioning that bind us to small ways of thinking and being. Liberation means being entirely awake, and fully alive." 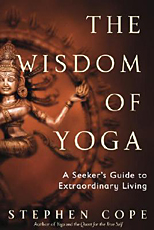