Once Upon a Time in Asia Stories of Harmony and Peace

"When I was traveling from Dhaka to a small village in Bangladesh, our bus broke down. As I started walking, I made friends with some of the other passengers. When we arrived in another little village, a Muslim family offered me hospitality in their small straw house. It was getting dark and there would be no transportation until the next morning, so I accepted their offer. The couple gave me their bed while the children slept on the floor.

"I was kept awake most of the night by the Muslim couple who stayed up all night singing and talking by a fire outside the little house. I could not figure out what was going on. The following day I asked why they had stayed up all night. I was told that they wanted to make sure that I, a foreign stranger, would not be harmed by any of their enemies, since I was probably carrying valuables. Their generosity of spirit and action touched me deeply."
— Father Richard T. Ouellette, M.M., Bangladesh 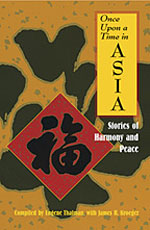