"The best way to cheer yourself up is to try to cheer somebody else up."
— Mark Twain

"Think about the idea of giving freely to someone, without being asked or being expected to give, without your knowing them or their knowing you.

"For example, you are crossing a toll bridge, and you decide to pay not just your own fare but also the fare of the car behind you. You leave a card, saying that this is an act of generosity from a complete stranger. Why don't they then do something that will make someone else happy . . . and pass the card on. They put a $10 note with the card next to an ATM machine, to be picked up by someone who needs the money. That person then buys an extra ticket at the cinema for the next customer, who buys a drink in a bar for a person selected at random . . . and so the process goes on. There will be lots of happy people who have taken pleasure in making lots of other people happy.

"It is attitudes and not just acts that can make a difference. Making another person happy could be like a butterfly flapping its wings and causing a hurricane thousands of miles away. Your unattributable act of generosity could be the start of a wind of change.

"Give It Forward Today: www.giveitforwardtoday.org

The eight degrees of charity

"Charity is a part of every religion. Moses Maimonides was a Jewish sage who lived in the 12th century. He suggested that there were eight degrees of charity:

• Go to the Give It Forward Today (GIFT) website, created by 12-year-old Alex Southmayd. He gives lots of ideas, plus you can download GIFT Certificates for the recipients of your generosity.

• Download two GIFT Certificates with the message 'You have been GIFTed. Your mission (if you accept it) is to GIFT two human beings with an act of kindness. Please pass this on . . . ' " 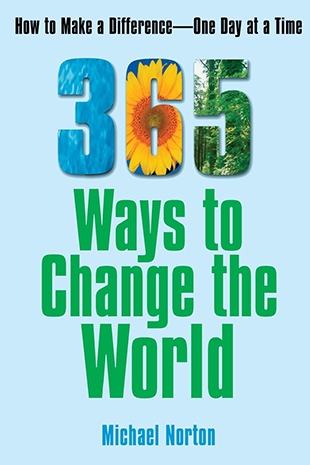