The Monk Upstairs A Novel

In The Monk Upstairs: A Novel, Tim Farrington presents some interesting and engaging characters who spur us to think more seriously about love, faith, and death. Here is an excerpt on the spiritual practice of reverence.

"The next day, their last on the island, they went to see the volcano. They'd been told that Kilauea was in a phase of eruption, actual lava flow, and that it was a unique opportunity and so forth, but they almost stayed in bed all day anyway. They had a room service breakfast delivered midmorning and were actually considering a room service lunch by the time they finally decided to rouse themselves for a final act of tourism.

"They had been told that the walk to see the place where the lava flow met the sea was quite long, and so they didn't linger in the visitor's center over the postcards and trinkets and educational displays on the science of the earth's tectonic plates; nor did they pause long at the edge of the awesome Kilauea crater. The drive down to the sea wound through stretches of recent lava flows, entire districts buried beneath fresh black rock, like the scorched landscape of a planet too close to the sun. They had wondered how they would know when it was time to walk, but it was quite clear when they arrived at their takeoff point: a recent flow had crossed the road, and the highway stopped without ceremony at the edge of a plain of new stone.

"They parked beside the road with the dozens of other rental cars that the promise of spectacle had drawn. A big sign warned them of the danger of toxic gas, heat vents, and collapsing shelves, absolved the relevant entities of any and all responsibility in the event that they should die a terrible flaming death, and advised them to wear sturdy shoes.

"They set out across the pathless rock, walking tentatively at first: the ground felt so freshly made that it was likely still hot. Within moments they were out of sight of the road and there was nothing but the pillowy crumplings of the recently hardened lava and the ocean to their right, the usually idyllic flavor of its blue-green made primeval somehow by the rawness of the new coast. Rebecca found her mind trying to wrap itself around the extraordinary nature of the place and finally surrendering. It was like nothing else, a place without history, without births and deaths, without soil, even. There was nothing for the mind here but fear and awe. It could have been any moment in the last four billion years, or the next four billion. This was just how the earth looked, newly born.

"They used up their exclamations quickly, and after that they walked in silence, holding hands when they could, releasing each other briefly to scramble up little rises and down sharp slopes. It was quiet and hot, a baking heat completely different from the usual mild wet Hawaiian warmth.

"After about half a mile they spotted a cluster of people up ahead. They slowed as they approached; there was something odd about the group, something Rebecca couldn't quite place at first. And then she realized that no one was talking. Almost two dozen tourists armed with cameras and the usual platitudes, and none of them saying a word. They were rapt, reverent, and silent.

"Mike and Rebecca made their way to an open spot along the edge of the little cliff where everyone had stopped. Below them was an amazingly normal looking beach of pale sand, overhung with the miniature massif of the accumulated stone. A single lumpen boulder at the waterline seemed the furthest advance of the lava; as Rebecca watched, a wave broke, ran up to the boulder, and exploded into steam. A moment later, from the overhang above the rock, a languid dollop of sluggish stone — red, she realized, glowing live red — oozed into prominence, stretched itself into a drop, and fell, splattering on the boulder in a fresh spray of steam.

"A murmur ran through the gathered tourists. New earth, Rebecca thought, as new as it could be, right there. The planet making itself. What seemed most amazing to her at that moment was how slow it was, the measured, relatively minuscule bit of that liquid stone that had made its molten way from somewhere toward the center of the planet, emerging for its instant of exposure and assuming its surface nature as the substance of the earth. She looked at Mike and he met her eyes and she thought, We will always remember this.

"They stayed for almost half an hour without saying a word. Other people came and went; some even arrived chattering, in several different languages, but the group never lost its quiet air of spontaneous awe. By the time they left, the stone on the beach had almost doubled in size.

"As Mike and Rebecca made their way back toward the car, she could feel the prayer in his silence, and for once she felt in sync with it, beyond the superfluities and the nonsense, able to relate. She took his hand, and he gave her a smile, raised her fingers to his lips, and kissed them, and she felt that as a kind of prayer as well.” 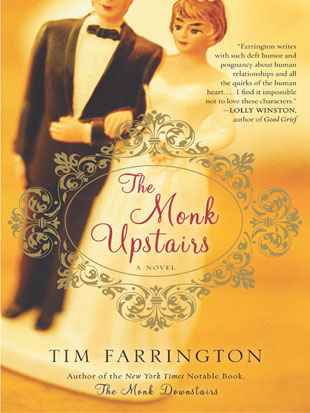