"When I was in the hospital, the one person whose presence I welcomed was a woman who came to sweep the floors with a large push broom. She was the only one who didn't stick things in, take things out, or ask stupid questions. For a few minutes each night, this immense Jamaican woman rested her broom against the wall and sank her body into the turquoise plastic chair in my room. All I heard was the sound of her breath in and out, in and out. It was comforting in a strange and simple way. My own breathing calmed. Of the fifty or so people that made contact with me in any given day, she was the only one who wasn't trying to change me.

"One night she reached out and put her hand on the top of my shoulder. I'm not usually comfortable with casual touch, but her hand felt so natural being there. It happened to be one of the few places in my body that didn't hurt. I could have sworn she was saying two words with each breath, one on the inhale, one on the exhale: 'As . . . Is . . . As . . . Is . . .'

"On her next visit, she looked at me. No evaluation, no trying to figure me out. She just looked and saw me. Then she said simply, 'You're more than the sickness in that body.' I was pretty doped up, so I wasn't sure I understood her; but my mind was just too thick to ask questions.

"I reached out for her hand. It was cool and dry. I knew she wouldn't let go. She continued, 'You're not the fear in that body. You're more than that fear. Float on it. Float above it. You're more than that pain.' I began to breathe a little deeper, as I did when I wanted to float in a lake. I remembered floating in Lake George when I was five, floating in the Atlantic Ocean at Coney Island when I was seven, floating in the Indian Ocean off the coast of Africa when I was twenty-eight. Without any instruction from me, this Jamaican guide had led me to a source of comfort that was wider and deeper than pain or fear.

"It's been fifteen years since I've seen the woman with the broom. I've never been able to find her. No one could remember her name; but she touched my soul with her compassionate presence and her fingerprints are there still." 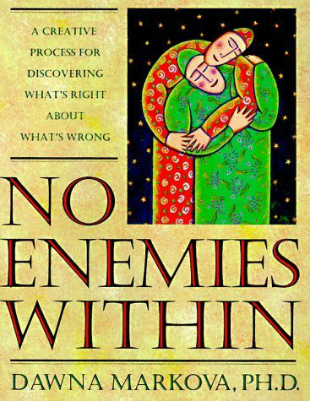