"One summer I spent many long hours in airports. I considered airline terminals to be necessary gateways to get me where I wanted to go, nothing more. What was supposed to happen was what would occur in the place where I was going.

"That summer I discovered that what is supposed to happen may occur wherever you are, and that the corridors leading to your destinations may in fact be more significant than the destinations themselves.

"I had just visited my family in Philadelphia. I arrived at the airport ready to return home to Indianapolis. The flight was delayed, and so I bought some frozen yogurt and sat down to read a book. In an hour, we boarded the plane. But as often happens, three hours later, close to midnight, we were still on the runway. And the book wasn't that good. The cabin was hot, and I was thirsty.

"Finally the flight was canceled. After waiting an hour in line to rebook a flight for the next morning, I found my way to a small hotel near the airport. It was two in the morning. It would be a very short night.

"I woke up early and returned to the airport, finally boarding my flight home. I found myself seated next to a gentleman from Indianapolis. He too had been booked on the canceled flight the night before. We commiserated. Neither of us was supposed to be there.

"I discovered some things about him, and he found out that I am a rabbi. 'For years,' he began, 'I have had questions I wanted to ask a rabbi. There are certain things about Judaism I don't understand.' We talked, and despite our sleep deprivation, the right words came easily. The two-hour flight passed quickly!

"Every place contains holy sparks; we just have to turn aside to see them for what they are. No things, not even thorn bushes, are useless unless we treat them as useless. No moments, whether we are tending sheep like Moses or traveling on an airplane, are meaningless unless we squander them. No places, whether Mount Moriah or an airport terminal, are insignificant unless we overlook them.

"In our rush to get where we are going, to do what we think we should be doing, we miss countless moments of revelation because we do not pay attention. We can choose to stay with the donkey, unaware of God's presence — or we can ascend the ladder with the angels and see the divine even in the ground beneath our feet." 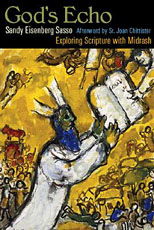