"There is a famous painting by the nineteenth-century French painter, Jean-Frances Millet, in which two women stand in a field, 'gleaning.' The poor were allowed in to pick up what the rich didn't take. They paid attention to what was left behind. I want my gardening to do the same: to pick the fields clean and to prohibit waste. I think of it as a new version of dumpster diving, a habit I join the poor in having. Ritualizing an attention to what otherwise might be wasted is an important ritual for an activist. We don't want anybody or anything left behind.

"Churches on the eastern end of Long Island stock their soup kitchens by picking up the potatoes left behind by the picking machines for their soup kitchens. A man died in New York City having worked the streets every day of his life. He left behind a garage full of working toasters, heaters, blenders — all of which had been thrown out by a fellow citizen. He had sold enough to bequeath over a million dollars to the city. He lived the life of a scavenger. I think too of Farm Share in Homestead, Florida, which receives and delivers nationally tons of vegetables 'too ugly' to ship. Started by one woman going through a difficult divorce, at the suggestion of a grower who wanted to get rid of the high fees he was paying in garbage pick-ups, Farm Share now supplies soup kitchens around the country. Imagine the pressure on a tomato or a squash: it must look perfect to go to market, just like many of us must look better than we do in order to go to market ourselves.

"Similar underground commercial practices exist as well. I think of the joy of a yard sale or of thrift shops and the way they costume beyond the market-niched boutique that displays only one kind of clothes for one kind of person. In a thrift shop, everyone gathers to recycle their wares and to recycle their costumed identities as well. Today I can be a businesswoman, tomorrow an aging hippie. I haven't been 'typed,' that wonderfully frugal version of the word 'stereotyped,' on the way in. I don't have to wiggle out of a box that marketers have made for me. I can wiggle into a short skirt in the back of the shop when no one is looking. Of course, that's not 'me,' but then again where else might I have the freedom just to see if it might be? The joy of a yard sale is the same: we may find almost anything. The Chelsea Flea Market on any given Saturday morning is a shopper's paradise, especially a shopper who doesn't want the ugliness of box stores or the conformity of the boutiques. There you can shop out of the box. The hunt is as interesting as what happens. We not only save an object from the dust of someone's garage; we also keep it out of the landfill.

"Gleaning is an environmental practice of some significance. It reduces waste while intensifying pleasure. It magnifies objects because they get to have a second and third life. Some things are just too good to throw away. That's why they end up at the 'white elephant' gift giving of groups at Christmas or at church rummage sales or in yard sales. They are being recycled, and the practice is not only economic and environmental. It is also spiritual. It says we care. Recycling spent on unwanted goods says we care about not filling the earth up with junk and that we care about filling up others with tortured vegetables and 'too good to toss' clothing.

"What is spiritual about gleaning is that it carries care. It pays attention to the edges and the corners, the garbage heaps and the tossed away. It says out loud that vegetables don't have to be perfect to be allowed out in society.

"Gleaning is an attitude as well as an act. We shop the yard sales. We save the ugly vegetables. And we also liberate: we take things out of closets and let others have at them. When we clean our cellar, we do the same thing. We rescue and liberate from the dustbin. Trash becomes treasure. If attics contain our past, then so be it. Everything, to the gleaner, does not have to have an immediate use. We can rotate uses.

"Spiritually, the ugly and almost used up, the snarled squash and the bruised tomato, are the stuff that too many of us are made of. I think of all the people either on disability or hoping to get disability. Something broke in them. They fell off a roof or a ladder. They had a car accident. They got hurt in a crime. Now they are no longer perfect and can't be sent to market. Gleaners still care about people like this: we go to the field and save them.

"Gleaners love Habitat for Humanity's jail project. It trains prisoners to build houses. A flat-bed truck wheels the house into the jail where time and life is being wasted. And it teaches electricity as well as building a house. When the house is done, the truck takes the house to its location. Gleaners find use for people whom others think are useless. Gleaners hate to see time or people wasted. Likewise, gleaners treasure what isn't done at the end of the day as much as what is. We relieve ourselves of the anxiety of the to-do list. We treasure what remains in the field as much as we like what is picked and used and perfectly so. I decorate my garden with broken shards of my favorite dishes. They become places to hold the hose when I water. And they help the seasons along. Even in seasons without color, I have color in my garden. And I don't have to say good-bye to my broken pieces. They remain with me, holding the hose and the memory of when they graced my table." 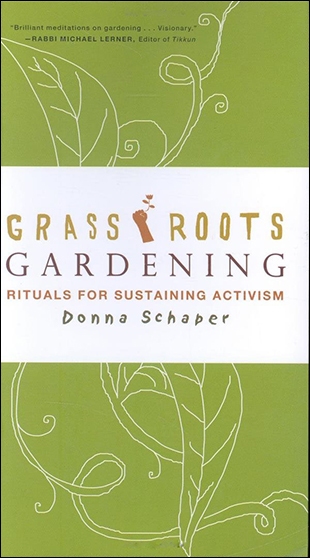