What On Earth Have I Done? Stories, Observations, and Affirmations

"The winter of '03. I remember. The Rockettes came to town at Christmastide — a road show version of New York's Radio City Music Hall spectacular, featuring the long-legged lovelies who dance in unison, kick high, and strut around to big band music. The hot ticket for Christmas. 'You just gotta go!'

"Spectacular is the operative word. And even more extravaganza was available that winter — a Big samurai movie, and a Big sailing-ship-battle movie, and another Big round of the Lord of the Rings, and the Big college football games, and the Big TV superspecial phantasmagorias.

"All spectacular. All big, Big, BIG!

"But somehow, hyperstimulation was not what I wanted for Christmas.

"Some low-key joy would do. Amateur joy.

"I remembered a conversation I had with a Greek friend in a small village on the island of Crete. I asked why the Greeks minimalize the celebration of Christmas but go all-out for Easter. He explained that December Twenty-fifth was just a birthday. Everybody has a birthday. Easter, on the other hand, celebrates a resurrection from the dead. That's amazing. That's spectacular. That's Big.

"Besides, by the end of December the Cretans have survived the stress of the tourist season, the exhaustion of the olive and orange harvest, and the first storms of the winter. Nobody is up for roasting lambs outdoors in the windy rain and dancing around in circles in the village square. A quiet church service, a walk home in the silent night, soup and bread, some old songs with family around a fire, and bed — that's it.

"The work of amateurs.

"And that would explain why on a Saturday night in December when I could have seen the Rockettes or gone to the symphony or watched explosions on a Big screen, I was somewhere else:

"In a small Lutheran church in my neighborhood, listening to a choir of dedicated amateurs sing their hearts out. At the intermission there were home-baked cookies provided by the ladies of the church. And I bought a raffle ticket on a handmade Christmas quilt. The proceeds would be given to the needy in the neighborhood.

"Then we returned to the sanctuary to hear a reading of Dylan Thomas' account of 'A Child's Christmas in Wales.' Finally, the audience joined the choir in singing carols, ending with 'Silent Night.' Off-key, but sincere.

"Unspectacular. No glitz, no glamour, no extravagance. No Big deal.

"Walking home in the rain, I realized this was not a Lutheran deal or even a Christian one. It was about the universal Companionship of Amateurs of any faith or culture, struggling like me to feel at home in the winter's dark, and awed to be part of the Mystery of It All.

"I wasn't excited when I went to bed. Just contented with getting what I wanted most so early in the holiday season: the company of people like me who find in themselves in the middle of winter a capacity for joy — small and deep and ordinary. 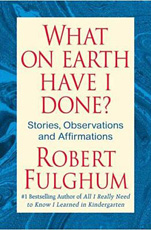