"As enso became a standard expression in Japanese Zen art, each Zen master imbued the gesture of the brush with his or her own Zen experience, teachings and Zen mind. As a result, the seemingly simple shape of the circle becomes a fascinating expression of individuality displaying variations in ink tones, brushstroke thickness, shape of the circle, and even the positioning of where the circle begins and ends. The American Zen master Robert Aitken wrote:

" 'Zen teachers like to draw circles. Sometimes they draw them around from right to left, sometimes around from left to right. These circles can represent emptiness, fullness, or the moon. Or they can represent the practice. The circle that goes around from right to left — against the path of the sun on the sundial — represents the hard way of practice before any glimmer of understanding appears. When it goes around from left to right, following the path of the sun, it represents the easier way of practice after a glimmer opens the Way. But both before and after the glimmer, the practice requires investment and conscientious diligence.'

"As the creation of enso increased, so did the variation of themes and inscriptions accompanying the circles. Although some enso appear without inscriptions, most include some phrase or verse reflecting an aspect of Zen teaching, sometimes from a Zen koan, sometimes a standard Zen phrase, and sometimes the master's own words. As Shibayama Zenkei wrote, 'In that brief expression of an idea, you see the writer's spirit. That is the implicit flavor of Zen. . . . The choice of the inscription comes from that; the choice of the inscription is an expression of spirit. As a Zen person, my heart is pulled ways I can't explain. The flavor of an enso without an inscription, to me, is like flat beer.

"Most broadly, enso represent the vast qualities of the universe, conjuring up its grandness, limitless power, and natural phenomena. But enso can just as easily represent the void, the fundamental state in which all distinctions and dualities are removed: 'Outside — empty, inside — empty, inside and outside — empty.' Very often enso depict the moon, symbolizing enlightenment, but can also represent the moon's reflection in water, symbolizing the futility of searching for enlightenment outside oneself. Less philosophically, enso can simply represent everyday objects such as a dumpling, rice cake, or basket. Yet even these seemingly mundane references are meant to cut to the heart of Zen teachings. In the Blue Cliff Record, case 77, a monk asks Master Yun-men, 'What is a teaching beyond Buddhas and Patriarchs?' Yun-men replies, 'A sesame bun.'

"Whatever the inscription or representation, the Zen master is creating a visual experience and encounter for the viewer — with the circle, the phrase, and the master's Zen mind. It is also a reflection of the master's lineage and all the teachings that have been transmitted from master to disciple through this simple circular gesture. Shibayama explains, 'A circle is a window, it is peace, silence, perfection, and harmony. It is whole and unified. In contrast, angular forms represent conflict, agitation, and excitement. They suggest omission, unevenness, the partial and the particular. The two concepts oppose each other. However, to look at a Zen enso from this point of view is an absurd mistake. A Zen enso is drawn round, but the circle's center conceals angles and within a four-sided angle is concealed a circle. The circle and the angle both conceal oneness. Within the center of the enso, truth reveals the life and soul of the ordinary circle and angle. This is the superior, absolute circle.'

"Over the centuries, enso have become an important symbol of Zen itself, a simple ink trace interpreted in myriad ways from deep esoteric meanings to mundane aspects of the everyday. But in this apparent contradiction of interpretations lies the underlying complexity of Zen, from its seemingly enigmatic koans and incomprehensible stories, to its direct, matter-of-fact approach to life." 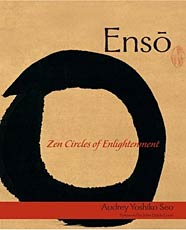