By Yongey Mingyur
Why most of us don't realize our buddha nature until it's pointed out to us.

"Most of us don't recognize our buddha nature until it's pointed out to us.

"Not long ago, I heard a story about a man in India who was given an expensive watch. Having no experience of what a watch is or does, he thought of it as nothing more than a pretty bracelet. He had no idea that it was an instrument that told time. Consequently, he was always late for work, was ultimately fired from his job, and lost his home. Although he made appointments with various prospective employers, he was either too late or too early for the interview. Finally, out of frustration, he asked a man on the street, 'Can you tell me what time it is?'

"The man looked at him in surprise.

" 'You're kidding, right?' the stranger said, pointing to the instrument the guy was wearing on his wrist.

" 'No,' the man answered. 'This thing is a nice piece of jewelry. It was given to me by a friend. What does it have to do with knowing what time it is?'

"So, exhibiting a good deal of patience, the stranger on the street taught him to read the hour and minute hands on his watch, and even the swiftly moving hand that swept over seconds.

" 'I can't believe this!' the fellow exclaimed. 'Do you mean to say that I've always had something that would tell me the time and I never even knew it?'

" 'Don't blame me,' the stranger said. 'Whoever gave it to you should have explained what it is.'

"After a moment, the man replied in a quiet, embarrassed voice, 'Well, maybe he didn't know what it was, either.'

"And with that he disappeared into the swirl of pedestrians, beggars, cars, and rickshaws that crowd the busy streets of India.

"Who knows whether this fellow was a buddha or just a random stranger encountered by chance, who happened to know the difference between a watch and a bracelet. In any case, the man was able to make use of his watch, show up on time for interviews, eventually get a good job, and reestablish his life. The lesson I learned from this story is that we're endowed with capacities that we frequently fail to recognize until they're pointed out to us. These reminders are what I like to call 'buddha moments' — opportunities to wake up, so to speak, from the dream of conditioned awareness." 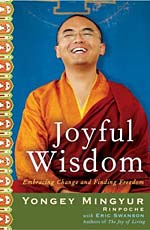