Freedom of Simplicity Finding Harmony in a Complex World

By Richard J. Foster
Richard Foster on simplicity as that which enables us to live lives of integrity in the face of the terrible realities of our global village.

"Contemporary culture is plagued by the passion to possess. The unreasoned boast abounds that the good life is found in accumulation, that 'more is better.' Indeed, we often accept this notion without question, with the result that the lust for affluence in contemporary society has become psychotic: it has completely lost touch with reality. Furthermore, the pace of the modern world accentuates our sense of being fractured and fragmented. We feel strained, hurried, breathless. The complexity of rushing to achieve and accumulate more and more threatens frequently to overwhelm us; it seems there is no escape from the rat race.

"Christian simplicity frees us from this modern mania. It brings sanity to our compulsive extravagance, and peace to our frantic spirit. It liberates us from what William Penn called 'cumber.' It allows us to see material things for what they are-goods to enhance life, not to oppress life. People once again become more important than possessions. Simplicity enables us to live lives of integrity in the face of the terrible realities of our global village.

"Christian simplicity is not just a faddish attempt to respond to the ecological holocaust that threatens to engulf us, nor is it born out of a frustration with technocratic obesity. It is a call given to every Christian. The witness to simplicity is profoundly rooted in the biblical tradition, and most perfectly exemplified in the life of Jesus Christ. In one form or another, all the devotional masters have stressed its essential nature. It is a natural and necessary outflow of the Good News of the Gospel having taken root in our lives.

"While it is important to stress that Christian simplicity is more than a mere reaction to the modern crisis, it should also be underscored that simplicity is keenly relevant to the massive problems of our world. We are witnessing poverty and starvation on a scale unprecedented in human history. By the time we fall asleep tonight another ten thousand individuals will have died of starvation — over four hundred per hour. Many more millions live on the brink of extinction — malnourished, aimless, desperate. It is difficult to relate to statistics, even when we know they represent precious ones for whom Christ died. But it is not hard to relate to the story of a man such as Kallello Nugusu, who had to sell his two oxen in order to buy food to keep his wife and six children alive when famine struck Ethiopia. He then had no way to plow his fields and plant his crops, and the food was gone. When asked what he would do, he responded that he didn't know. Then, dropping his head into his hands, he said, 'When my children cry because they are hungry, then it is very hard to be a father.'

"Though such accounts touch us deeply, we often feel helpless to do anything. How can we respond with any degree of integrity and effectiveness? It is the Spiritual Discipline of simplicity that gives us the basis for developing a strategy of action that can address this and many other social inequities. Individual, ecclesiastical, and corporate action can spring from the fertile soil of simplicity.

"We also struggle with the problem of competing responsibilities that all demand our attention. Like Jack's beanstalk, our obligations seem to grow overnight. We are trapped in a rat race, not just of acquiring money, but also of meeting family and business obligations. We pant through an endless series of appointments and duties. This problem is especially acute for those who sincerely want to do what is right. With frantic fidelity we 4respond to all calls to service, distressingly unable to distinguish the voice of Christ from that of human manipulators. We feel bowed low with the burden of integrity.

"But we do not need to be left frustrated and exhausted by the demands of life. The Christian grace of simplicity can usher us into the Center of unhurried peace and power. Like Thomas Kelly, we can come to know by experience that God 'never guides us into an intolerable scramble of panting feverishness.' In simplicity, we enter the deep silences of the heart for which we were created. Pope John XXIII declared, 'The older I grow the more clearly I perceive the dignity and winning beauty of simplicity in thought, conduct, and speech: a desire to simplify all that is complicated and to treat everything with the greatest naturalness and clarity.' " 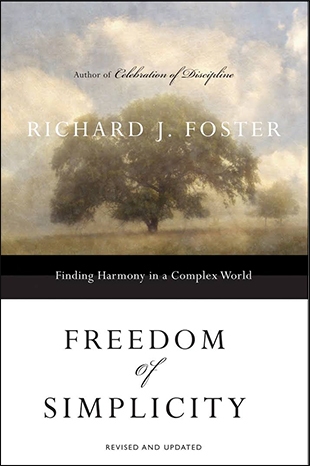