The Power of Compassion Stories That Open the Heart, Heal the Soul, and Change the World

By Pamela Bloom
Buddhist master Sogyal Rinpoche on expressing compassion from an airplane.

"Some of the first dharma students in the West like John Giorno, Allen Ginsburg, and William Burroughs had invited Dudjom Rinpoche (one of the most extraordinary Tibetan meditation masters of the last century) to come to the United States, and I had the great honor to travel with him as his translator on his first Atlantic flight. I remember I was sitting next to him in the plane when we flew over, and there was one moment when he looked through the window and said softly, 'All those I fly over, may they all be liberated.' He said it in a particular way, so quietly and unobtrusively: he was not boasting, he was not saying that he had the power to do this, but just in the humblest way imaginable, '. . . may all these beings be liberated.' And I thought, 'How extraordinary: this master really does have that power.' But it was because of his prayers as well. It did not mean they were all going to be liberated. Rather, through the power of his prayer, he would have become the cause of their liberation. That is bodhichitta." 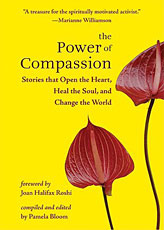